Muscle & Fitness: You trained with Arnold Schwarzenegger a few times in your day, right?
Bruno Sammartino: Back in the ‘60s, when I wrestled in California, I used to stay in Santa Monica. So I worked out with Arnold, Franco Columbu, Dave Draper and those guys a number of times.

What were those workouts like?
I loved working out with those guys because not only did they have great bodies, but they used fairly good weights too. I enjoyed training with them just because of the fact that they were the elite bodybuilders at the time. But I’m proud to say, too, that I was pretty good lifter on my own. Before I turned pro as a wrestler I competed in both Olympic lifting and powerlifting. Well, bench pressing and squatting, of course, are exercises that bodybuilders and everybody does, so I was pretty good at those. I had heard so much about guys who trained there [at Joe Gold’s gym in Venice] and the lifts they did, I wondered if I was up to par with them. So I was very pleased to work out there because I think I lifted as good and better than most.

During the height of your wrestling career during the ’60s and ‘70s, what was your training like?
I was working out three, sometime three and a half, hours a day with weights. I would work out in the morning because I wanted to be very rested up for the wrestling matches at night. So I would do a workout, then have a light breakfast, and then I would go to bed for a few hours. I would eat an early dinner no later than 3:00 so that it would be fully digested by the time I went in the ring. So yeah, I worked out very hard and heavy, but I always used to try and take a couple hours nap afterward just to recoup and rest up. 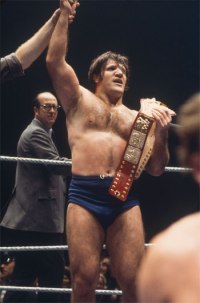 You set a world record with a 565-pound bench press in 1959…
Right, with a two-second pause and no elbows pads or anything like that. They were very strict back then. You had to bring the weight down to your chest and the judge would say, “a-thousand-one, a-thousand-two,” clap his hands and then you started your movement from a dead stop on your chest. And you couldn’t move any part of your body except for the arms. I say that because years and years later I saw a powerlifting meet, and I was very bothered by it because these guys wore some pads on their elbows that were so stiff that it took a lot of pressure just to take the weight down to your chest. And it made it easier pushing up, because it would spring back out. And they didn’t do the two-second pauses anymore. So I was disappointed that they changed the rules.

What’s your exercise regimen like today at 77 years old? You’re in great shape.
Three days a week I do roadwork. I had hip replacement, and the doctors tell me I can walk as fast as I want, but I’m not allowed to run. So I power walk. I do between four and five miles. Then I come home – I have a well-equipped gym downstairs – and I do about 800 leg raises and leg crunches for stomach work, and then I stretch a little bit. And that’s it. The next day, I work out with the weights. Now, do I lift heavy weights anymore? No, I’m 77, and my weight is not 275 anymore. I’m 215 now, maybe 220 with my clothes on. For example, on bench press, I don’t go higher than maybe 215 for reps. For shoulder work I do 35-pound dumbbells for side laterals. Nothing really heavy anymore, because, #1, I’m old; #2, I’m not as heavy as I was; and #3, I don’t want to put too much stress on the joints at this stage of my life. I use weights that are comfortable for me.

You’ve accomplished a ton in your career, from wrestling to lifting to even dabbling in bodybuilding. Is there one achievement that stands out from the rest?
I had a pretty tough childhood, being in Europe during the war and all that stuff. I barely survived. I came down with rheumatic fever and I wasn’t expected to live. I was a human skeleton when I came to the United States. I was 14 years old and I weighed, like, 83, 84 pounds. Once I started training, I really dedicated myself and really pushed myself. And to me, the payoff was when I won the title in Madison Square Garden against [Buddy] Rogers in ’63. Because I had reached the top, and I felt like I could provide my family with a better living than I had growing up. Because when we hid in those mountains for 14 months from the Nazis, we nearly starved to death. And a lot of people did, and we buried a lot of people up in that mountain. To be fortunate enough to survive that, and then to later be recognized as the champion, that had to be as big a deal as anything. But there were a lot of things. It’s difficult to take any one thing and say this was it.

A glass of milk a day also helps your heart health.

Travis LaBazzo's protest went viral, but not exactly as planned.