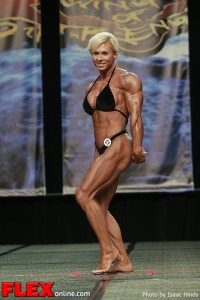 Now more than ever, it’s all eyes on Nicole “Coco” Austin. The curviest model in the game —who also happens to be the wife of rapper Ice T and star of the E! network’s Ice Loves Coco—seems to have it all: brains, booty, and now a new body and a new act. Here, Coco tells how she got rid of the weight, kept the curves, and found herself headlining the famous Las Vegas Peepshow.

What triggered your recent weight loss?

Really, I started in Vegas in Peepshow, and I wasn’t even trying to lose weight. It just happened naturally. Of course, coming into this part in a production that’s already been going on for four years, the girls in the show have amazing shape. Their bodies are on a whole other level.

So I started to think maybe I need to get a little more toned. You’re dancing every show—it’s basically doing cardio every single night. What happened was, my body changed from being a stockier, more muscle-type body to a slender dancer’s body. Really, I’m the exact same weight—135 pounds—as when I started this whole thing. I just lost all the fat and gained muscle, and that changed the shape of my body.

I saw what my body did naturally from just moving, so I thought to myself, “Hm, I want to see how far I can take this, and get to a more competitive level—and that’s exactly what I’ve been doing.

How has the NPC inspired your weight loss?

Recently, I went to the NPC Jay Cutler Classic show in Vegas because one of my trainers is a competitor and she’s balls-to-the-wall—she’s really into it. She asked me to come and support her, so of course I did. I was amazed at how beautiful the bodies were. I’m in love with muscle. Muscle is beautiful, and that’s what this competition lifestyle is all about.

I was even more inspired when I realized I’m not too far from some of these girls, and that I could do that. Recently, I’ve lost a lot of fat and am now down to 13%—I started at 24%! That’s a crazy change in my body. It made me think, “Maybe I can do that someday.”

You’re known for your backside. With your weight loss has that part of your body started to disappear?

It’s funny, because people always say, “Whatever you do, don’t lose the booty.” And of course I don’t want to lose it—are you serious? But it also fuctuates. That’s how you know my booty isn’t fake—if I had implants, it would stay the same all the time. When I work out more, it gets bigger. People would think it would be the opposite, but my booty has a lot of muscle. The fat makes it jiggly and more curvy looking, but really, it’s the muscle I build underneath that makes it more pronounced. That’s why I always do squats and lunges with weights. Weights are key. I work on the top of my booty muscles. If I work hard enough I can get my butt pretty big, but it takes a lot of dedication and heavy weights. Anyone can do it. Yes, I have good genes, and that helps, but it also helps me push and mold my booty.

Look at men, for example. There are men out there with the scrawniest arms, and people look at them and say there’s no way they can get big. But if he gets in the gym and does the right weight, this guy can be the biggest guy in the world. Everyone starts out somewhere.

I’m not worried about my booty, though. It does go up and down, but even when I’ve been extremely skinny, I’ve always had a booty. I don’t think it’ll ever go away.

Do you find that guys are more into you when you’re a little curvier, or when you’ve toned up and put on some muscle, as you’ve done now?

I’m getting more attention just because people have seen that I’ve gone to such extremes to work on my body lately. They see me on TV and think I’m, like, really soft, and assume I’m 6 feet tall and kind of a chubby girl. But I’ve never been chubby, and I’m 5'2", so I’m the exact opposite of what you’d imagine just from what you see on TV. When people meet me, they’re like, “Wow, you’re so fit!” They love my legs and my abs. I honestly have never gotten so many compliments on those body parts in my life. It’s not just the booty or the boobs anymore. It’s actual body parts I’ve worked hard on at the gym, and I’m proud of that. But, there are some guys who are still like, “Yeah, I liked you when you were heavier.” But heavier isn’t necessarily healthier, so I like where I’m at right now. I don’t feel I need to be less or more. I feel like I’m perfect where I’m at.

Are people intimidated by you in the gym these days, now that you’re so into the ftness lifestyle?

Defnitely not. People actually come up to me all the time and ask how to do this and how to do that. I’m just not an intimidating person, no matter how hard I go at it in the gym. Maybe my pictures intimidate some people, but when you meet me in person, I’m an everyday girl. At my meet-and-greets after my show, people always tell me I’m way more down-to-earth than they imagined I’d be. I don’t see myself as some kind of celebrity or star—I’m just an ordinary girl who goes to the gym and might be a little popular. That’s how I like to see it.

What made you decide to take over for Holly Madison in the Las Vegas Peepshow?

When I frst got the offer, I turned it down. I didn’t want to leave my husband and my whole lifestyle. I knew I had things so well organized for 12 years in New York, and I didn’t want to disturb that in any way. But Ice pretty much convinced me this was something I should do, because it’s definitely a once-in-a-lifetime deal—not just taking part in a Vegas show, but headlining it. He basically said to me, “Honestly, Coco, if I were offered a Vegas show, I’d go and do it.” I was more concerned with leaving him—but he’s here for the summer, now that he’s done filming [Law & Order:] SVU. So we’ve made it work.

On numerous occasions, you’ve described yourself as a bodybuilder. Can you tell us what you mean when you say that? Is every girl who lifts weights a bodybuilder?

I think that if you actually lift heavy weights to change the structure of your body, you’re a bodybuilder. I don’t go into the gym and do cardio to slim down. I go into the gym to purposely gain muscle, and the only way to do that is by lifting heavy weights. I mean, I’m leg-pressing 400–500 pounds. That’s bodybuilding.

Which fitness accomplishments most stand out for you?

I do TRX  and use my own body weight—so I’m just proud that I can lift my own body weight. And the way I do pole fitness now is extreme acrobatics—it’s on a whole different level out here in Vegas. You go up 12 feet in the air, hit a split or a pose, and hold it. That’s some serious business. It’s intense!

Do you really do squats in stilettos?

Yes, but I don’t bring them to the public gym. I have a private gym in my building in New Jersey, so what I do is basically exhaust my muscles in tennis shoes, then put on some little stripper shoes I’ve brought and work a different muscle in the leg. I do it to trick the body—that’s one of my moves.

Do blondes really have more fun?

People don’t realize it, but my natural hair color is actually brown. But I feel the same whether I’m a brunette or blonde.

Do you have any advice for guys who want to land a girl like you?

Don’t be cocky! When you have that “I’m the sh*t” attitude, there’s no way you’ll get a girl like me. Girls like me look for that cool guy who can make us laugh.