Throughout their careers, these oldschool ballers have shown everyone else how the game is played. Nobody talked about X-frames until Freeman came along and unveiled the archetypical one. The X-Man’s shoulders cap one of the best structures in the game. They called James “The Menace” because he was a threat to anyone else when he stepped onstage. His width, due in part to his thick, massivedeltoids, shouldered lesser bodybuilders off the stage.  The two men, who are now both 47 years old, sat down to talk about training shoulders. 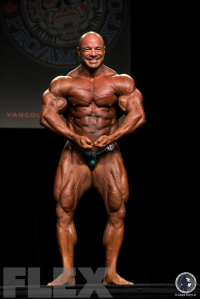 Pick up the November 2013 issue of FLEX Magazine for the the "Old School Shoulder Smash" featuring IFBB greats Dennis James and Toney "X-Man" Feeman! DJ and The X-Man talk shop and share tips on building round, capped delts in this FLEX exclusive. Pick up your copy of FLEX on newsstands now! Or click here to Download FLEX at the App Store.