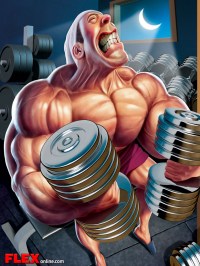 Before a training session, you may turn to a number of supplements — a protein shake, nitric oxide boosters and maybe even stimulants, such as caffeine or yohimbine to augment intensity and focus. There’s also a supplement you wouldn’t normally place anywhere near the top of that list: melatonin, the well-known sleep aid. Sure, melatonin has a host of benefits, including antioxidant protection and improved sleep quality for enhanced recovery, but who the hell wants to doze off during an all-out set of squats with 405 pounds across his back?

However, including melatonin as part of your preworkout cocktail may not be as far-fetched as you’d initially think. Surprisingly, research is revealing that supplementing with it before a workout can stimulate muscle growth without negatively affecting performance.

Before we get into melatonin’s role in muscle growth, it’s important to understand its function as a sleep aid. When our eyes are exposed to darkness, signals are relayed to the brain to begin the sleep process. These signals are sent to the pineal gland, which acts to convert serotonin into melatonin, also known as N-acetyl-5-methoxytryptamine. Once melatonin levels are increased, it circulates throughout the body to spread the message of sleep to active cells.

When taken in supplemental form, melatonin has been shown to have powerful effects for inducing sleep. Melatonin supplements have proven beneficial for a wide range of people, including those experiencing occasional sleeplessness, insomniacs, those suffering from seasonal affective disorder and even travelers trying to adjust from jet lag or time-zone changes. Study dosages for promoting sleep usually range from 0.3 to 5 milligrams.

Although we all know the importance of sleep for recovery from training, quality sleep often gets sacrificed due to our busy lifestyles. Unfortunately, skimping on rest can lead to subpar recovery and the inability to break through training plateaus. If you have trouble winding down at night and find that you stare at the ceiling counting sheep, try taking a melatonin supplement 30 minutes before you get into bed. Not only can it help you fall asleep faster, but it also has been shown to decrease the amount of time it takes to enter into deep sleep, and may help you sleep longer. All of this adds up to a better quality of overnight rest and improved muscle 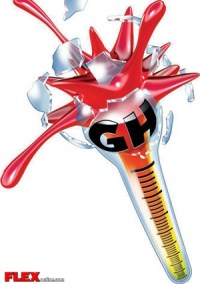 interesting but little-known benefit of melatonin is its effects on growth hormone levels. Studies performed in the 1990s first demonstrated that melatonin supplements could raise GH levels at rest or when taken in conjunction with cardiovascular exercise.

Since weight training also has been shown to increase GH levels, scientists from Baylor University (Waco, Texas) designed an experiment to test the combination of melatonin supplements and weight training on GH levels. Sixty active, college-aged men and women were assigned to receive either melatonin or a placebo one hour before a workout. Blood tests were taken a few times before the exercise session. The subjects performed seven sets of high-intensity leg presses to stimulate natural GH release. The results showed that even before the workout began, the men receiving the high-dose melatonin supplement (5 mg) had elevated GH levels. After the training session, men in the low-dose (0.5 mg) and the high-dose (5 mg) groups had elevated GH levels when compared to the placebo group.

Boosting GH levels during and after training provides a multitude of benefits for bodybuilders. GH acts as a powerful stimulus for increasing muscle mass, and research confirms that the higher GH levels are during and following workouts, the greater the gains in muscle mass and strength.

You may take melatonin supplements before training to boost GH levels, but you’ll also get the added antioxidant benefits of the supplement. Antioxidants protect muscle cell membranes and other important structures, as well as DNA, from exercise-induced free radical damage. Although an increase in free radical levels during exercise is normal, very intense training can lead to excessive free radical production and muscle damage. There is even evidence that excessive free radical buildup can increase fatigue, which may in turn limit the amount of reps you can perform during multiple sets of an exercise. 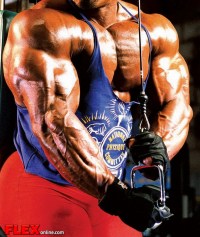 Another benefit of melatonin may be its ability to assist in the battle to get lean. Preliminary studies in animals have found that melatonin helps maintain glycogen levels during exhaustive exercise, most likely by increasing usage of fat stores due to elevated GH levels.

Further human studies are needed, but there is sound scientific rationale supporting the ability of melatonin to increase the amount of fat released from bodyfat stores, while sparing muscle glycogen levels during training. This can pay off by keeping muscle cells fuller and fat cells flatter.

Head over to the M&F Store and pick up some melatonin!

Previously in this article, we raised one obvious question regarding the effects of melatonin on exercise. That is, won’t taking melatonin supplements before training make you sleepy? A recent study out of Liverpool, England, attempted to answer this question by providing subjects with either 2.5 mg of melatonin or a placebo before a running trial. The researchers didn’t find any difference between melatonin and the placebo on alertness, sleepiness or RPE (a measure of how difficult each subject rates the exercise protocol) when melatonin was taken 75 minutes before exercise. 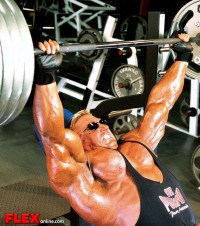 In other research where melatonin was given before exercise, these variables were not directly assessed, but it is noteworthy that these studies did not report that subjects receiving melatonin felt sleepier or that they had a more difficult time completing the training protocol. Although everyone’s response to melatonin will vary, most studies show that sleepiness and fatigue are negligible if it is taken within 75 minutes of exercise. 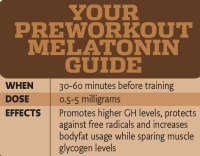 and small doses of melatonin have been found to boost GH levels, start with small amounts of the supplement about 30-60 minutes before workouts. Research indicates that as little as 0.5 mg could increase GH levels, so consider starting there. Depending on how your body reacts, you can always work your way up. We recommend between 0.5 and 5 mg of melatonin as an effective range for most bodybuilders. This will help you boost GH levels during training, while minimizing any potential sleep-inducing effects.

More GH without any dent in performance? There’s a lot to like about melatonin as a workout aid. It just goes to show, you never know what science will reveal next in the ever-changing world of training, nutrition and supplementation. FLEX