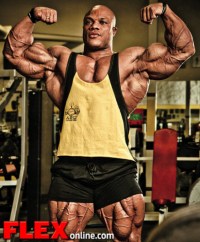 With a nickname like the Gift it’s no secret that Mom and Dad passed along more than a fair share of favorable muscle-building genes. But like all great champions, even Heath has had to put in his work to make pretty good arms really good, and then even more to take really good arms to the next level and beyond, to where they are now. The gains may not come as easily for us, but the Gift’s training wisdom is something the rest of us can apply in our own quest for attention-grabbing arms. So, here’s how Mr. Olympia built two of the best guns on the planet.

"For guys with lagging arms, I would suggest training them twice a week. Hit biceps and triceps after a big body part on separate days, then devote a single day later in the week to just arms.”

Heath usually performs 8–12 reps for each exercise, which research shows is the ideal range for building muscle. “I get real good-quality reps in this range,” Heath says. “It’s heavy enough that I can get a good contraction and feel the muscle working through the full range of motion. However, sometimes I’ll go heavier and do 6–8 reps, just to build more strength and give the body something a little different. It’s important to keep things fresh so that your body doesn’t adapt to one type of stimulus and stop growing.” 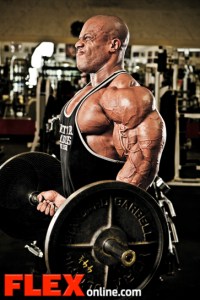 “Next to the bench press, it’s the most popular exercise ever invented, and for good reason: Nothing packs on sheer size like barbell curls. Keep your elbows stationary—you don’t want to let your elbows drift up, because that shifts the stress from your biceps to your front delts. If you have to, use an old-school Arm Blaster to make the movement strict. Plus, the Blaster makes your arms look freaking huge.”

“Vary your grip. The standard shoulder-width grip will hit the entire biceps, and that’s best for mass-building purposes, but you should change it up every now and then. For example, grabbing the bar so that your hands are inside shoulder width will focus more on the outer biceps. A grip wider than shoulder width will work the inner biceps more. You want your arms to look impressive from every angle, so make sure all areas of the biceps are developed equally.”

“I like to force a lot of blood in [my arms] and there’s nothing like 21s. You start off with seven reps, raising the bar up to the halfway point. Then you do seven more from the halfway mark to the top. Finally, you do seven full reps. That’s 21 reps total for one set. Now do that for three sets. Obviously, you can’t use as much weight as you would if you were doing a straight set, but the tradeoff is the insane blood volume, which I’m a big believer in. The burn will be intense and your arms will blow up like crazy!”

“You don’t get more basic than this. These are great for building mass, especially in the upper triceps near the deltoid. Keep your head up and your body as vertical as possible to keep the stress on your triceps. If you lean too far forward, you end up working your chest. I generally do these last and don’t need to use a ton of weight. It’s a great way to finish off the tri’s and get a massive pump. Sometimes I’ll do the bench version or use a machine to add variety.”

“Dumbbells rank right up there with barbells for adding size. I actually prefer them because each arm works independently, and that’s a great way to overcome any imbalances between the lef and right arm. Symmetry is something every bodybuilder needs to train for.” 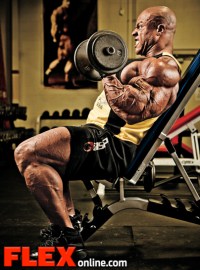 “I also supinate, which means that I start with the dumbbells facing each other at the bottom, but as I bring them up, I start turning my wrists out so that by the time they are at the top, they’re in the standard curl position. The biceps, in addition to bending the arm, also help to turn the wrists outward, and this takes advantage of that movement.”

“I usually alternate each arm, but every now and then I’ll do a bunch of reps for one arm while the other one just holds the dumbbell, then I’ll do that one arm. For example, let’s say I’m doing 10 reps. I’ll do five reps with one arm, then five reps with the other arm, come back to the first arm and do five more reps, and finish the last five reps for the second arm. I just feel like I can focus more on each arm and get more quality reps that way. I stole that from Jay [Cutler] in a Battle for the Olympia DVD.” 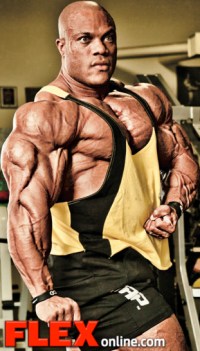 Unlike lots of guys who start out lifting weights, Heath focused more on triceps than biceps. That came about from two things. The first was basketball. “It was drilled into us in basketball camp,” Heath recalls. “You need strong triceps for long-range jump shots. I still remember to this day, Dan Majerle hitting a game-winning three-pointer practically from midcourt, and he didn’t even heave it; it was a set shot with textbook form, and you need some pretty strong triceps to pull that off.” The second motivation came during Heath’s college days. “A friend of mine had a picture of Kevin Levrone on his laptop, and I remember being really impressed by his triceps,” Heath says. “They were so thick and striated to hell. They didn’t even look real. The outer heads just popped out to the side when his arms were hanging. I’d never seen anyone with that development. Whenever I trained triceps, I would visualize Levrone’s.”

“I like to start with some form of pushdowns to get some blood flowing and warm up the elbow joints. I definitely don’t recommend jumping right into heavy extensions because that can really thrash your elbows over the long haul.” 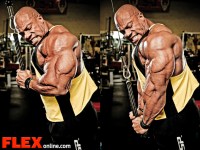 “I’ll alternate between a bar and a rope handle. When I want to go heavier, I’ll use the bar. But with the rope, because I can spread the handles apart at the bottom, I get a longer range of motion and a tighter contraction. When I go really heavy with the rope, I have to keep the handles together, but I still get a great pump. 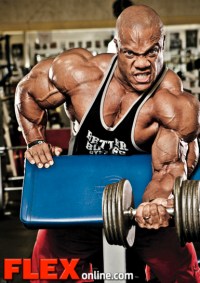 “Back in the day, they used to say that you could lengthen short biceps by doing preachers, but we all know that’s a myth. You’re born with your muscle attachments and nothing you do can change that. But that doesn’t mean you can’t improve on what nature gave you. Because of the angle, these will thicken the lower part of your biceps and make your arms appear fuller.”

“We’re all told to use a full range of motion, but in some cases, like with preacher curls, it could be dangerous to take that too far. I notice that when I let my arms straighten out at the bottom, I get a pain in the biceps tendons. I’m not trying to strain the tendons, so I stop just short of full extension, which also keeps constant tension on the muscles and makes them work that much harder.”

“I’ll do these with an EZ bar or a dumbbell. With the bar, I can obviously go heavier, but with a dumbbell, I can work each side independently and really isolate each arm. I’ll throw in machine preachers every now and then for variety. It all depends on how I feel. Also, because I travel a lot for guest appearances, it depends on the type of equipment the gym has.” 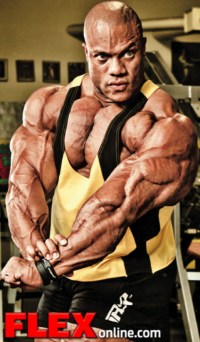 “These are almost like barbell curls for triceps. You can go pretty heavy, and the triceps do all the work. I like the cambered bar because it’s a little easier on the joints. Hany [Rambod, Heath’s trainer and nutritionist] has a different way of doing these. At the top, instead of holding the bar above my chest, Hany has me keep it slightly angled behind my head. This keeps constant tension on the muscles.”

“Keep your elbows stationary to keep your delts out of the movement. Sometimes, afer reaching failure, I’ll do a few reps of close-grip bench presses with the same barbell to flush more blood into the muscles. Occasionally, I use dumbbells.” 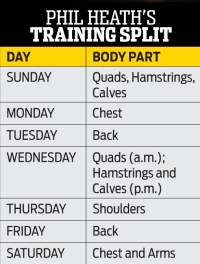 “This is one of my favorites. It gives me a really great stretch at the bottom. These emphasize the long head of the triceps, which gives you that sweeping, hanging look in the front and rear double biceps poses.”

“I don’t point my elbow straight up toward the ceiling. I like keeping it at about a 45-degree angle to minimize pressure on my joints. It just feels more comfortable to me, and I’m keeping tension on the muscles the whole time, so I know it’s working.” – FLEX