If you're old enough to read these words, there’s a 99.9% chance you’ve said something to piss off a woman. And while we’re sure you probably didn’t mean to elicit that strong of a reaction, you can probably recall a few cringe-worthy memories when some flippant remark made your girl (or a complete stranger) fly off the handle.

To help you know what not to say to any woman from here on out, we asked 10 female comedians about what men say that irritates them the most. Here are their takes on the words that should never leave your lips again—unless you really enjoy the doghouse.

5 Texts That Kill Your Chances>>>

“Are you wearing that?”

“If you’re taking me out somewhere, and you see me with clothes on, then yes, I'm wearing that. This is not a hologram outfit under which I'm actually naked and about to get dressed in something you won't passive-aggressively tell me you don't like.”
–Fara Greenbaum, comedian, New York City 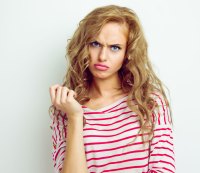 “You should smile more.”

“I hate when guys tell me to smile more. Maybe I just got fired today. Maybe I've just been walking around in 5-inch heels all day. Maybe I'm just not impressed with your mesh t-shirt. I don't tell you to do things, like get a haircut. But you definitely need one.”
-Chrissie Mayr, comedian and host of Comedy at Stonewall Inn, New York City

“A pet peeve is when strangers—always men—tell me to smile. This happens a lot on the NYC subway, and no one on the subway is happy to be taking the subway. While waiting for the train one day, a guy asked me, ‘Why aren't you smiling?’ and I told him, ‘Because I didn't push you in front of the train yet.’ Another time, a perv licked his lips at me and was like, ‘Have a good day, sexy.’ I told him, 'Since we're in the spirit of giving orders, go f— yourself."
-Jessica Sager, comedian, New York City

“A friend of mine encountered this pretty recently when a man came up to her after a show she was on and told her she was too pretty to use explicit language during her act. Unfortunately, this sort of comment crops up more than you'd think, as well as the notion that women can't be both ‘pretty and funny.’ This sort of backhanded compliment is guaranteed to incite rage in the recipient because, shocker, I don’t like being told what I can and can't do because of the way society may perceive me. And no, I’m not too pretty to kick your ass.”
-Nikki Black, Comedian, Philadelphia, PA

5 Reasons She Went with the Other Guy>>>

"You wanna watch a movie?"

“I love movies. But come on, we all know what that means! 'You wanna watch a movie?' translates to 'Let’s bone.' Most sentences uttered by men can be translated to 'You wanna f—?' Sure, let’s bone but you said we could watch my favorite movie! You can't ask a movie lover to watch a movie unless you plan on finishing the flick. You better be a real good fella if you're going to interrupt Good Fellas.”
-Jessimae Peluso, comedian and star of MTV’s Girl Code [pictured above]

“This makes me irate! (And I never say that word!) This is never okay! No one ever wants to hear that, especially a girl. We already have enough problems trying to keep things sucked and tucked in all day let alone you telling us we look like we didn't sleep well. Yeah, yeah, I am tired. I'm busy walking my dogs, writing a book, touring the country, putting on acrobatic lingerie, and posing for you all while you make yogurt commercials. (That was my fake fight with boyfriend John Stamos.)”
-Jessimae Peluso 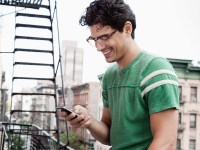 “Have you lost weight?”

“When a guy says this, or 'Wow, you look slimmer!' my blood starts to boil because, nope, I'm the exact same weight I was yesterday. I resist the urge to grab a marker, pants this doofus, circle all his fat and instead say, 'I haven't lost any weight. But you've lost any chance of going home with me.' The only way this dude can recover is by full-on admitting he was just trying to be nice and didn't know what else to say because I'm always looking great. But seriously, don't comment on a woman's weight, ever!”
-Marianne Schaberg, writer and comedian, VH1

"Wow, I didn't recognize you with makeup on."

“It drives me nuts when I wear makeup and a man says to me, ‘Oh my god, I didn't recognize you! You're so pretty.’ This is the ultimate backhanded compliment. I don't wear make-up at my day job because I don't consider all of life a show. A simple 'You look very pretty today,' is fine. Beyond that, we're not that close, so please keep your comments to yourself. I don't tell you when your bald spot looks extra shiny, don't tell me when I'm looking tired or fat or thin. I have a mirror. Believe me, I know.”
-Corinne Fisher, comedian, New York City

“Sometimes when men find out I perform stand-up comedy, they think that gives them permission to 'fake-insult' me. When I don't laugh, they ask, ‘Can't you take a joke?' to which I say, 'Can't you tell a joke?'  Enjoying humor isn't a green light for reciting every sexist joke your uncle told the family at Thanksgiving dinner.”
-Carolyn Busa, host of "Side Ponytail" in Williamsburg, Brooklyn

7 Pick-Up Lines to Avoid At All Costs>>>

Keep your relationship alive under quarantine with these tips.

Here are some last-minute ideas that will sweep her off her feet.

Impress your Valentine without compromising either of your lifestyles.