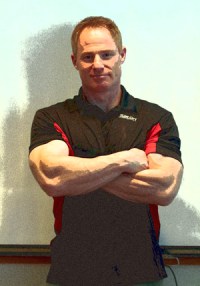 Science and education have been David Sandler's passions for more than two decades. Widely recognized as one of the foremost authorities on muscle and strength development, David Sandler epitomizes the art and science behind human performance. Early on, powerlifting was his passion, as Sandler possessed a natural strength few others had. But it wasn’t until he began to study human physiology and biomechanics that his numbers pushed record heights, setting state, national, and world records in the bench press. His squat and deadlift were not far behind until a sport-ending injury sidelined him. From that point on, coaching, educating, and empowering others became his mission as he continued to dive deeper into the science and practice of muscle building and strength and conditioning.

David Sandler is now the Director of Science and Education for iSatori, where he spends his time wrapped up in research, education, and developing new products.

Sandler is still regularly called upon for his insight and expertise by coaches, researchers, media, and practitioners for various projects, including television, magazines, and other media. He has been involved as the lead science advisor to more than 40 episodes of television, been an invited lecturer to more than 400 national and international speaking engagements, has authored six books, numerous videos, and more than 300 articles for popular industry magazines. David is a former strength and conditioning coach for the University of Miami and assistant professor at Florida International University, Florida Atlantic University, and the University of Las Vegas, Nevada.

Additionally, he is certified by many organizations and is a Fellow of the National Strength and Conditioning Association (NSCA) and the International Society of Sports Nutritionists (ISSN).

Known for his precise research-backed methods and multi-faceted, extremely detailed approach, results are the only thing Sandler is satisfied with. Having tested just about every theory, David has developed state-of-the-art principles and systems that have rarely produced anything other than winners. The Hyper Growth Lean Mass Training Program is one of his most successful ventures, helping hundreds of people already gain muscle size and strength while losing bodyfat. This program is challenging, but it will build your strength and improve your physique unlike any training routine out there. In his words: “You Can’t Be Soaring With Eagles If You Are Running With Chickens; Suck It Up and Reap the Rewards of Your Hard Work!”

With words like that, it is hard to see why any program he designs wouldn’t produce solid results. Good luck, and train hard and with passion.

Go back to the 8 Week Hyper Growth Program >>