A billionaire playboy “dies” in a boating accident, five years later, he comes back a bona-fide badass. That’s the premise for the CW’s Green Arrow, about a man who returns home after being missing and presumably dead, but isn’t who he was when he left. Now, instead of filling his days with booze, clubs and girls, he decides he’s going to fight crime instead.

But what we’re really concerned with his finding out how actor Stephen Amell got in shape to play Green Arrow. Which is why our friends at ConFITdent put together this hardcore, full-body workout that’ll get you in shape to fight some crime, or at least look like someone no one wants to eff with. 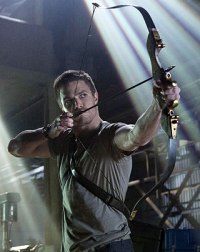 Get the Green Arrow workout! >>

Check out this crazy pull-up move in the Green Arrow trailer:

Strengthen your lower body with this hard-hitting regimen.

Learn how to make your own MMA strike bag and how to use it.