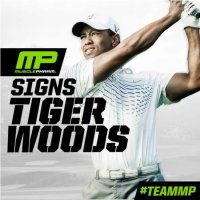 Golf star Tiger Woods may be convalescing from the back surgery that has kept him out of the game for the past few months, but he is still making major moves off the course. Starting July 1, he will become a brand ambassador for MusclePharm. Woods, 38, signed a multi-year endorsement deal that will include the sponsorship of his golf bag.

Woods joins Muscle & Fitness executive editor Arnold Schwarzenegger, New York Jets wide receiver Eric Decker, and San Francisco 49ers quarterback Colin Kaepernick in endorsing MusclePharm’s nutritional supplements. “One of the keys to success as an athlete is making sure you are fueling your body properly, which is at the core of MusclePharm’s mission,” says Woods. “This golf-bag venture is a great way to launch this partnership. I look forward to working with MusclePharm to help people achieve their peak physical form.”

Woods took to Twitter to announce the deal to his 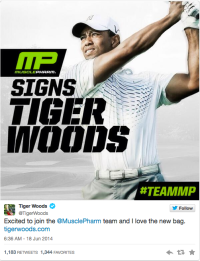 Chairman and CEO of MusclePharm Brad Pyatt was delighted to be embarking on a working relationship with an elite athlete of Woods’ stature. “Tiger Woods is more than a golfer,” he said. “He’s an elite athlete possessing a legendary work ethic and determination, as well as a focus on remaining in top physical shape. We are excited to be working with Tiger to bring more attention to nutritional science and show how it can enhance strength and overall athletic performance—and most important—fuel athletes safely.”

14 Tips to Make Getting Ripped Easier

They'll grow your waistline, but shrink your attention span.

A new report says it won't be in a standalone film, but we're still excited.

Could this be the in-ring return he's been teasing?