My Name is Angie Garcia, I am 33 years old, from Valencia, Venezuela, and I am the youngest of three kids. My parents got divorced when I was eight years old. My father didn’t live with us when I was little, but he was always around.

Growing up, I was always interested in sports. I played volleyball in my senior year of high school and I graduated when I was just 16 years old. I started going to the School of Graphic Design, but I soon left to pursue a career in modeling. At that time I joined a modeling agency where I learn protocols, charm, and runway walk and excelled at local fashion shows and beauty pageants. When I was 19 years old I decided to move to Miami, FL to seek out bigger modeling opportunities, but being an immigrant at such a young age wasn’t easy. Between working multiple jobs and learning the English language, the time time and money that I could dedicate to modeling was very limited.

At the age of 26, I married bodybuilding competitor Omar Garcia, and that's when I become more interested in training and competing. I knew that being fit and healthy would benefit my modeling career, as well as open the door to opportunities within the fitness industry.

I competed for the first time in 2008 at the NPC Southern States. I entered the competition as a Novice Figure Competitor and placed 3rd in my class (which I was pretty happy with for my first time). After that, I took a break for three years to train and support my husband in his competition endeavors. 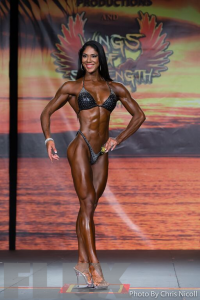 In 2012, with the help of my husband, I started preparing for my second competition. We competed at the same show in 2012, NPC Florida State, where I entered the Open Figure class and my husband competed in the Light Heavyweight Bodybuilding class. We ended up becoming the Figure and Bodybuilding Overall champions!