The ink is dry and it’s official: William Bonac is the latest IFBB Pro League bodybuilder to join Team AMI/Weider!

It wasn’t that long ago that William “The Conqueror” Bonac was one of the best-kept secrets of the European bodybuilding world. Competing in the 212 division in 2012, Bonac did well enough to make the posedown in all three shows he contested, but didn’t generate the kind of buzz that translates into global recognition Then, in 2014 he did a whopping nine shows, all of them in the open division, winning two (Golden State Pro 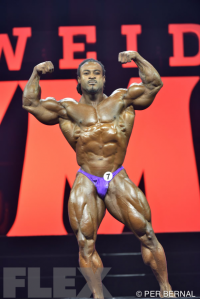 and Grand Prix Russia) and placing 15th in his Olympia debut. Last year, he added the Nordic Pro and the Dayana Cadeau Pro to his tally and placed eighth at the Olympia. Now an AMI/Weider athlete, Bonac said of his exclusive contract:

"Today is not just another day. It's a new opportunity, another chance, a new beginning. Embrace it!! It's not only a privilege but an honor to announce that I have signed with Weider Publications and am proud to be Weider athlete. Thanks to the whole Weider team. Don’t let small minds convince you that your dreams are too big!"