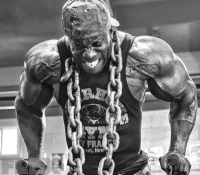 Kevin English knows that people are obsessed with his weight. Which is pretty funny, considering that he pays so little attention to it. The week before he began dieting for the 2014 Olympia 212 Showdown, he hadn’t weighed himself in months. That’s one of the many changes English has made this year.

So what exactly does he weigh off-season the week before his diet begins? English skirts my question by saying that he used to get up to 260 or 270 pounds, which made for a lot of cardio and a grueling contest diet but didn’t result in big muscle gains. He realized that staying lighter off-season led to better conditioning, so he now controls his calories by simply looking in the mirror. “If I felt like I was too fat I’d cut calories. If I saw I put on quality muscle I’d continue what I’d been doing,” English says.

He’s a huge proponent of ignoring the scale because he thinks too many bodybuilders get caught up in numbers. “Doing it this way depends on your goals and metabolism and how you absorb carbs and fats. You see a lot of nutritionists putting people on a standard contest diet, but everyone reacts differently to foods and the scheduling of those foods,” English says, “so you have to constantly assess your own physique.” His cardinal rule for dieting is eating a meal every 2.5 hours, paying particular attention to the one eaten post-workout, a time when your body is in an anabolic state. Off-season, however, his rules are very fluid. He eats only four meals a day with a couple of not-so-healthy snacks in between. With a laugh, he admits that he sometimes eats half a coffee cake for one snack and saves the other for later. 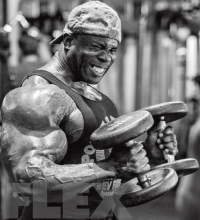 would be the envy of any bodybuilder surrounds English. The legendary Bev Francis trains him twice a week at her famous Powerhouse Gym, which English manages during the early-morning hours. The other three days he trains alongside IFBB pro bodybuilder Juan “Diesel” Morel and amateur Nic Medici. Oscar Arden offers nutrition advice, motivation, and critique of his physique.

English values the fact that his trainers and workout partners don’t lie to him. “Bev is like my older sister—I listen to everything she says. My training is in her hands. I respect everything she went through as a bodybuilder, so I listen to every word. Oscar Arden is another good set of eyes. He won’t b.s. me. At this level, the last thing I need are a bunch of ‘yes’ men.” Never one to turn down advice, English also relies on his massage therapist, Tim Mangano, to suggest exercises he’s never seen before to target specific areas. He credits the changes to his physique to Mangano’s massages as well as the stretches he’s taught him.

Ultimately, though, English is in charge of his own success. He unabashedly says, “No one knows your body better than you. In the past, I let my nutritionists be in charge. There were things I was told to do, but in the back of my mind I knew it wouldn’t work for me. This time around—off-season as well as contest prep—I’m doing my own thing. If I want to take in an insane amount of carbs or have a cheat day, that’s what I do. I know my body.”

NO TWO WORKOUTS ARE THE SAME 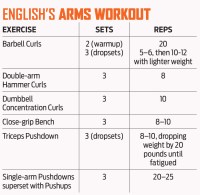 he skirted my question about weight, English can’t give me a formulaic answer when I ask about his sets and reps of each exercise. Every arm workout is different—that’s just how he trains. “I try to vary the angles on the same exercise from week to week. I’ll go light one week but heavy the next. I might do a lot of supersets or dropsets with short rest intervals. I vary the intensity of the workout depending on how I feel that day.” But don’t think that he does his workout on a whim. Since he’s up at 2 a.m. every day and works until noon at Powerhouse Gym, English has plenty of time to visualize the day’s workout. He tells me, “I have the workout planned in my head. It’s set in my mind beforehand. Nick and Juan go along with the day’s plan and motivate me.”

I can’t imagine pushing yourself through a hard workout when you’re in the throes of dieting, but English has years of wrestling experience behind him, which helps. “You have to be mentally focused. I can be tired, but I muster all my energy for the workout. With Nick and Juan beside me, we feed off one another’s energy,” he says.

English trains biceps and triceps together, always starting with the biceps exercises. The one consistent principle is that he trains heavy. Always. “I know a lot of guys will lighten weights before a contest. I keep my weights heavy, but I also add high-rep sets or dropsets at the end as I get closer to a contest,” he says.

This is one of his key exercises because it targets three muscles: the biceps (brachii), the brachialis, and the brachioradialis, with the last (the forearm) doing much of the work. However, English likes these for developing his outer biceps. His tip for doing these properly is that you need to pull your shoulders back. “Don’t hunch forward or relax your shoulders, or you’ll end up using the front delts to assist,” he says. 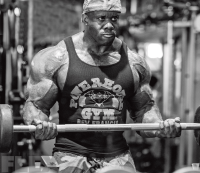 He warms up with two sets of barbell curls then works his way up to three to four working sets. English is one of the only bodybuilders I’ve met who uses the straight bar for heavy curls. “I like the straight bar. I notice it shapes my biceps better than using the EZ-curl bar.” He does sets of 8–10 reps, but some weeks will do only 5–6 reps, then drop the weight and finish of with another 10–12 reps until the biceps are fatigued. 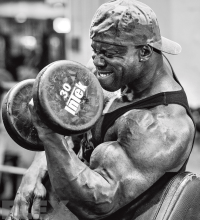 Even on this isolation exercise, English goes heavy—up to 75 pounds. However, he never locks out or bounces on the bottom. “I go only three-quarters of the way down due to the stress it places on the brachialis,” he tells me. He likes this exercise for building the biceps peak.

Click NEXT PAGE to see the rest of English's off-season arm routine! >> 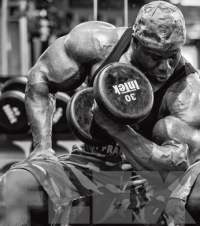 biceps exercise is also good for building the peak. English does these slowly, flexing the whole time and contracting at the top for a full second. “You need to go all the way down and get a full stretch in order to get into the muscle fascia and cause it to grow bigger. A three-quarter movement won’t do that.” He does 60 pounds for this exercise and does no fewer than 10 slow reps per set.

This is the main mass-building exercise for triceps. English reminds me that the triceps is the larger muscle of the arm, not the biceps, so going heavy on triceps naturally leads to bigger arms. English goes up to 405 pounds on this exercise, which always requires a spotter. Using a shoulder-width grip, he keeps the elbows pulled in close to the body and his back fat on the bench while doing his three sets. 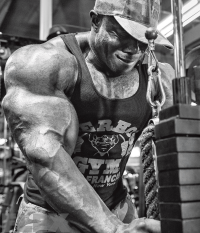 There are as many variations of this exercise as there are bars to use on the cable attachment. English prefers doing them with a rope. He arches his back while keeping his elbows as close to his body as possible and pushes down to a full extension. He never comes all the way back up because he wants to keep the tension on the triceps. He normally incorporates either dropsets—going down the stack in increments of 20 pounds until he can’t lift any more—or supersets with weighted dips, on which he uses a chain.

of triceps with another superset—alternating single-arm pushdowns with pushups of a bench. Pushdowns are the only exercise on which he goes light. He’ll do 20–25 reps of them to push blood into the muscle as well as isolate it. “Single-arm movements are crucial. On a machine, you can push more with one arm than the other, so one can get stronger. You can’t do that with single-arm exercises,” he says. Immediately after a set, he jumps into doing 15–20 pushups, which he feels use a lot of secondary stabilizer muscles.

Ever the ex-wrestler, English downplays the intensity of the workout, focusing more on the long-term results than the immediate pain as he thoughtfully says, “Bev always reminds me that up there onstage you’re all by yourself. You have to want a win for yourself and nobody else. I try to remember that every time I train.” FLEX