Unquestionably, one of the most popular workouts for packing on a lot of muscle mass quickly is German Volume Training (GVT). Gains of five pounds of solid muscle are often seen in as little as three weeks. Many articles have been written about this workout, but as with the kid’s game of “operator,” sometimes the details get lost in translation.

GVT works by targeting a group of motor units (nerves that cause a specific group of muscle fibers to contract) and subjecting them to an extensive volume of repeated efforts. Specifically, 10 sets of 10 reps of a single exercise. The body adapts to this extraordinary stress by hypertrophying the targeted fibers.

The following includes a sample GVT workout within a month-long program that involves performing each training session a total of six times. Although supplementary work can be performed for the same muscle group, only two exercises in each workout are performed for 10 sets of 10 reps. Any additional work could easily push you into overtraining.

German Volume Training goes beyond being a challenging workout physically; mentally, the sheer volume of the work can eventually make you dread going to the gym. After a GVT training cycle you’ll need a break—a long break. A good training plan would be to perform GVT for just one month, once a year or, at the most, twice a year.

With that background, let’s take a look at some of the mistaken ideas associated with GVT, along with a few insider tips on how to get the most from this workout.

First, some bodybuilders believe that GVT is simply a slight variation of Vince Gironda’s 8×8 workout. It’s not. One of the major differences is that there’s more rest time between sets in GVT, making it possible to use more weight for each exercise and thus build more muscle mass.

10 Rules to Eating for Mass

Live by these rules for maximize muscle gains.

Although GVT doesn’t produce a high level of growth hormone release, it’s not as effective in the short term for reducing body fat as other programs, such as the German Body Comp program. That said, because GVT is a superior method of increasing muscle mass, it will more effectively raise your metabolism (i.e., the rate at which you burn calories). I’ve found that for every pound of lean tissue gained on GVT, there is often a loss of an equal amount of fat weight—this is especially true with women.

There’s also the mistaken belief that Olympic lifts and their assistance exercises, such as power cleans or snatch pulls, could be used within the GVT program. No, they can’t. First, it would be difficult to maintain proper form in those complex exercises using such high reps—even in pulls. More importantly, those exercises are dynamic with no eccentric overload, and as such the time under tension for those types of assistance exercises is too short to create maximal gains in hypertrophy.

With a few exceptions, such as leg curls, it would also be a mistake to use machines for GVT. Machines don’t provide the same stress from a total-body training stimulus due to their increased stability. Performing 10×10 of leg presses is certainly difficult, but nowhere near as difficult as squats. Select exercises that recruit a lot of muscle mass. Triceps kickbacks and side leg raises are definitely out—squats and bench presses are definitely in.

You’ll increase the weight only after you complete all 10 sets with the predetermined starting weight. The load you use will be sub-maximal—you don’t try to reach failure on all sets; only the last three sets should be hard. Basically you get the training effect from the law of repeated efforts. Once you’re able to complete 10 sets of 10 reps, you’ll increase the weight by 2.5-5%. Also, you’ll perform the reps without any outside assistance.

Due to the physical and mental challenges of the GVT, I’d recommend at least a year of conventional training before trying it. If you’ve tried GVT before, review these insider tips. The German Volume Training program is one of the most difficult workout programs you’ll ever perform, but the results are worth it. 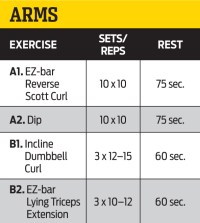 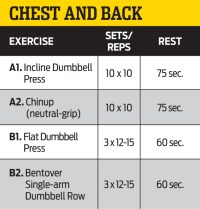 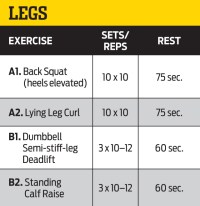 Eat Big, get big, but don't overdo it. Your body can only process so much at one time.