In bodybuilding, the first decade of the new millennium has been sort of an amalgamation of the three that preceded it. Gyms contain new and in many cases better machines, but bodybuilders also have come to discover the limits of mechanical devices for sparking growth. It’s interesting that the five men on our list for that decade all relied mostly on barbells, dumbbells and dipping bars on chest days. That’s not to say that equipment advances have not impacted pec training, however. Here are the biggest chest workout changes since the start of 2000:

5. Dennis James: D.J.’s chest drew your eyes to it even when he was standing semi-relaxed in anOlympia lineup, and when this winner of three pro shows in the 2000s was called out, you knew his best pose would be his last, because his most-muscular resembled worlds colliding.

4. Victor Martinez: The second-place finisher in the 2007 Mr. Olympia has never had a high-def chest, but it’s full and proportionate from every angle, and, like Schwarzenegger, Haney and other forefathers, he demonstrates that pecs can be both scary huge and aesthetic.

[[{“type”:”media”,”view_mode”:”wysiwyg”,”fid”:”428306″,”attributes”:{“alt”:””,”class”:”media-image media-image-right”,”style”:”width: 200px; height: 232px; float: right; margin: 4px;”,”title”:””,”typeof”:”foaf:Image”}}]]3. Johnnie Jackson: A world-class powerlifter and the winner of two pro bodybuilding shows, Jackson’s best body parts are his pecs and his traps, making for a devastating most-muscular. His pecs would be the thickest of the decade if not for the two men who’ve spent even more time than him in MetroFlex Gym in Arlington, Texas.

[[{“type”:”media”,”view_mode”:”wysiwyg”,”fid”:”428311″,”attributes”:{“alt”:””,”class”:”media-image media-image-right”,”style”:”width: 200px; height: 237px; margin: 4px; float: right;”,”title”:””,”typeof”:”foaf:Image”}}]]2. Branch Warren: Noted for his hardcore training and grainy thickness, if the two-time Arnold Classic champ has a best body part other than legs, it’s chest. Built with barbell presses, dumbbell flyes and weighted (chain) dips, all as heavy as he can manage, Warren has the densest pecs in the pros today, although his training partner, Johnnie Jackson, might have something to say about that. 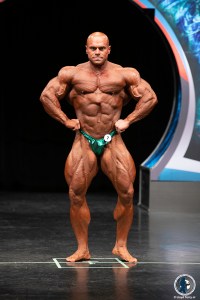 1. Ronnie Coleman: What is it about MetroFlex Gym that our top three all built their pecs there? The answer is the atmosphere. It’s as hardcore as gravel and broken glass, and, 40 years after Schwarzenegger’s dominance, relentlessly toiling at the free-weight basics remains the key to pec growth. Coleman knew that and never deviated from that strategy, even as he tied Haney’s record of eight Sandows. In fact, he continued to hit his chest twice weekly with separate, press-centric routines, even as his competitors did half as many chest workouts each year. The result was two of history’s best pecs, as devastatingly dense in the side shots as they were in the front lat spread and most muscular.

CLICK HERE TO GO BACK TO THE 'BEST CHESTS' SERIES >>