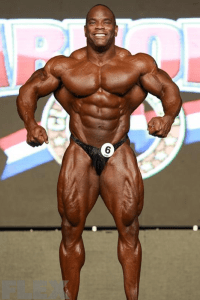 In 2001, Johnnie O. Jackson became the National Overall Champion of the United States at the NPC Nationals. Since then, he’s been continuously climbing his way to the top of the IFBB pro ranks with his awe-inspiring size, definition, and symmetry.

His first IFBB Night of Champions was in 2003, where he placed fifth. Later that same year he competed in the Ironman Pro Invitational, where he placed ninth and his first Mr. Olympia, placing 11th.

It takes a certain mindset to get so far. In fact, much of Jackson’s training discipline and life philosophy comes from his stint in the armed forces. He even served in Desert Shield and Desert Storm. With his unrelenting hardcore training and his intelligent nutritional and supplementation plan, Jackson regularly competes in powerlifting events.

A Back Workout for the Ages

The training routine that built one of the world’s thickest and densest backs in the IFBB Pro League.

Legendary workouts for every body part to get you HUGE in 2017!

Train Your Chest for Size and Strength

How Johnnie Jackson built the best traps in bodybuilding history.