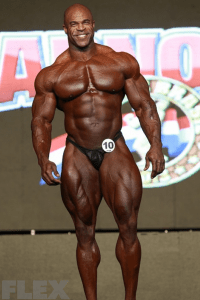 Bodybuilding to Ed Nunn is a 24/7 sport.  A sport that he picked up in college.

It wasn’t until 2007 though that he saw his hard work pay off as he competed at the National level for the first time, taking sixth place in the super-heavyweight class at the North American Championships.

Nunn believes to be at your best in this sport you must surround yourself with the best. And that he does, as he’s often featured alongside the likes of Ronnie Coleman, Jay Cutler, Dexter Jackson and Toney Freeman. Bodybuilders in which Nunn has described as well-rounded individuals, who while they have busy lives, make time for those who are important.

“Sometimes just taking time out to chat with fans, can show people that you are a real person. The people’s champion….” he has said

Place of Birth: Anderson, IN

FLEX photographer Per Bernal brings you up close and personal with the athletes.

Interview with Ed Nunn Before the 2014 Arnold Classic Brazil

Candice Lewis and Oksana Grishina interview Ed Nunn on the eve of the 2014 Arnold Classic Brazil!

Ed Nunn Before the '14 Arnold Classic

Exclusive interview as Ed Nunn prepares for the 2014 Arnold Classic.

Wolf, Rhoden, Warren, and others destined to clash in Columbus for the 2014 IFBB Arnold Classic.

Ed Nunn gets a leg up on his competition with his high-volume, fast-paced routine

Find the "window" for a huge upper chest.