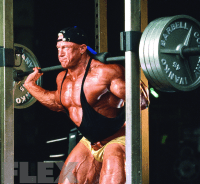 Just about every bodybuilder getting ready for a contest starts cutting back on carbs to lose weight. Some people follow the Zone Diet approach that advocates a moderate restriction in carbs to enhance weight loss, while others advocate more extreme reductions in carbohydrates. Researchers took 30 obese subjects and randomly assigned them to consume either a calorie restricted high-carbohydrate diet (60–65% of energy from carbohydrates and 20–25% from fats) or a calorie-restricted moderately restricted carbohydrate diet (43– 47% of total calories as carbohydrate and 36–40% as dietary fats) for six weeks. Protein contents of both diets were 15–17% of total energy. A two-week washout period was applied, following which participants were crossed over to the alternate treatment arm for an additional six weeks. Anthropometric, blood pressure, and biochemical measurements were performed before and after each phase of intervention.

At the end of the study, both groups lost almost exactly the same amount of body weight; they also gained the same ~800g of lean mass and lost 1.3kg of body fat.

In sum, the 40% reduction in carbs, compared with the 60% reduction in carbohydrate intake, didn’t result in a difference in overall weight loss, but there was a trend toward greater reduction in waist circumference in the 40% restricted group. The 40% carbohydrate group wasn’t associated with different changes in fasting plasma glucose, insulin, or cardiovascular risk profiles. However, it resulted in decreased diastolic blood pressure and lower prevalence of the metabolic syndrome (i.e., the group of risk factors that raises your risk for heart disease and other health problems, such as diabetes and stroke). So if you’re dieting, it looks like a moderate replacement carb diet isn’t going to make a difference—you’re going to have to at least drop carbs more than 35% to make a noticeable difference in weight loss. – FLEX

6 Tips to Boost Your Metabolism

Follow these tips to make sure your metabolism is working with you, not against you.