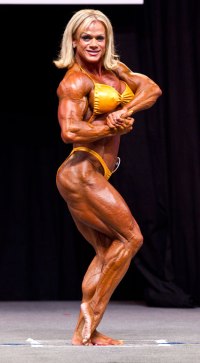 From speed skating to bodybuilding and figure, Cathy LeFrancois has built quite the athletic career for herself.

As a youth, LeFrancois had won five medals in the Quebec provincial championships, an accomplishment that has not been equalled since. But the accomplishments she is most proud of came after 1995, the year LeFrancois earned her pro card when she won the overall title at the CBBF Canada Cup. LeFrancois eventually retired from bodybuilding and transitioned to figure competition, competing in her first figure contests in 2005. In late 2006, she switched back to bodybuilding. She has went on to win the New York Pro in 2008, 2009, and 2010.