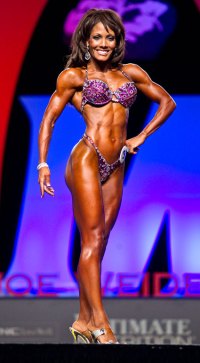 Cheryl Brown is proof that it’s never too late.

Even though she had been a personal trainer since her freshman year in college, it wasn’t until 2008, at the age of 36, that Brown began competing in amateur figure competitions.  Within 12 months she earned her IFBB Pro Card and after just four years on the circuit she became a six time IFBB Professional Figure Champion. Due to the training demands of competing on the professional level, Brown took a break from her career as a clinical exercise physiologist in cardiac rehabilitation and pulmonary wellness.

But her career aspirations have since taken a new shape. Brown has chosen to pursue a doctorate degree in chiropractics in hopes of opening a sports chiropractic and wellness center, including exercise therapy and nutrition services upon her graduation in 2016. She will continue to train and compete in figure competitions as time permits.