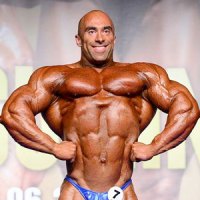 There is no “off season” for Darren ‘Daz’ Ball.

The British bodybuilder strives to keep lean year round, keeping his diet and training consistent, this way there are no surprises come competition time. Unlike other bodybuilders, Ball incorporates martial arts, boxing and football into his training, with the thought that  it’s important to be considered an athlete rather than just a bodybuilder. But such sports have always been at Ball’s core.

He played semi-professional football for Ilkeston Town from the age of 16 to 20, even though weight training had sparked his interest a year prior. It wasn’t until he caught sight of a 1996 issue of Flex Magazine with Dorian Yates and Nasser El Sonbaty on the cover that Ball knew he had to turn his hobby of weightlifting into a bodybuilding career.