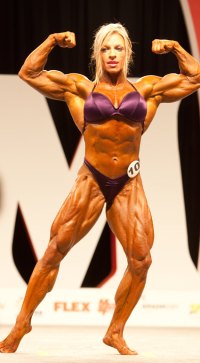 Debi Laszewski was 21 years old when she started lifting. And it was all because she caught a showing of The Terminator featuring Linda Hamilton.

Laszewski competed in her her first show at age 24, it was a natural show and she won her class. She took a break, however, from 2001 to 2005, instead focusing on her career as a personal trainer. But in 2005 when the “light-heavyweight class” was introduced her interest was instantly sparked and she signed on.

Since 2009, Laszewski has placed in the top six of every single Ms. International and Ms. Olympia held that year. She finished second in the 2012 Ms. Olympia, placing her as runner-up to Iris Kyle. This was her best performance in a professional IFBB event for her entire career, and Laszewski  was considered a serious threat to the reigning champion.