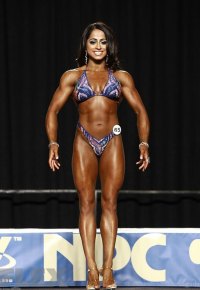 Jacqueline Thomas was simply looking to pay off a debt. But before she knew it, she was on stage at the 2009 Collegiate Nationals taking home first and overall in her class.

Thomas, an engineering student, began working as a personal trainer in 2007 to get a jump start on paying off college loans when she was introduced to the sport of bodybuilding. Having recently sustained a knee injury, she focused her attention on weightlifting in hopes of easing stress, but more importantly keeping herself active. As her knee healed, she began making gains in strength and size.

In her last year of school, and with two years of training, Thomas entered the 2009 Collegiate Nationals. With such great results, she kept at it and went on to take first place in the Championships Open Figure at the 2012 IFBB Arnold Amateur International.

Thomas On the Hunt for a Pro Card