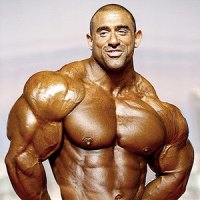 Jaime Atienza may have come out fast and strong on the ameatur circuit, but his climb to the IFBB ranks wasn’t as easy, yet, like a true champion he made it.

He won the 2004 National Championships and took part in the 2004 Men’s Worlds in Moscow, Russia. He didn’t see another big win until 2007 when he took first in the “IronBaby” and continued the series of national victories in 2008, winning “Costa Canaria”, “Aminostar Cup” and “IronBaby” once again. The following year he claimed fourth place at the Arnold Amateur Championships, coming in behind Roelly Winklaar, Lionel Beyeke and Julio Cesar Balestrin but ahead of Alvin Small and future world champion Marek Olejniczak.

Atienza finally went pro in 2010 at the Mr. Europe Pro. The excitement was short-lived though, he had to undergo complex throat surgery. Unable to follow his bodybuilding nutrition plan, his training plan faltered as well. But by 2012 he was back on stage and continues to impress.