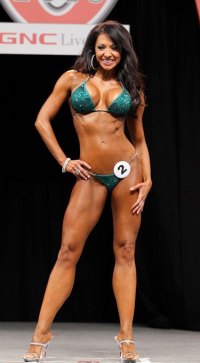 Jamie Baird and her husband have always been big fans of bodybuilding.

It just so happened that during one of the many competitions the two attended, the 2007 NPC Mid Florida in Orlando –  to be exact, Shannon Dey, founder of Bombshell Fitness, approached Baird and recommended that she give competing a try. Without much hesitation, Baird agreed. Six days later, she was training under Dey.

Since competing in her first event, the 2007 NPC Southeastern USA, Baird had become stronger, sharper, more energized, vibrant, confident, positive, empowered and effective.  She is motivated by becoming the best ‘me’ she can be. Giving relentless effort every day, even when it was inconvenient or uncomfortable, Baird earned her pro card. She has taken second in the 2010 IFBB Europa Show of Champions in the Pro Bikini division; first in the 2011 IFBB Pittsburgh and 2011 IFBB Jacksonville Pro.