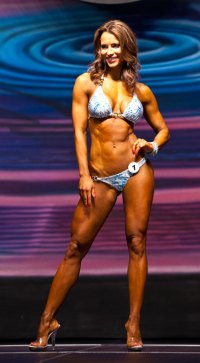 Jelena Abbou, with a one way ticket to the U.S., left her small town in Serbia at the age of 20 to pursue her lifelong dream of becoming a fitness model.

Abbou’s first few years in the U.S. were tough; new language, new culture … but she never gave up on her dream, she never stopped working out and refining her nutrition plan. Eventually she became a personal trainer, in turn motivating her more than ever to hit the competition circuit.

Abbou placed fifth at her first show, the 2001 NPC Women’s Extravaganza. The next day she sent her photos to several fitness magazines and the calls started coming in. Abbou has been modeling and competing ever since.