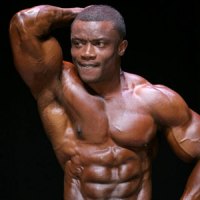 Born on September 16th, 1971, I am the oldest of 6 children. I moved to the United States with my father and stepmother right before my adolescent years. We resided in Queens, New York for a short time before moving to Long Island; this move provided more employment opportunities for my father.

After graduating from Westbury High School, I attended Hofstra University’s NOAH program for the summer. Due to financial circumstances, however, I transferred to Nassau Community College and back to Hofstra to finish my degree in Criminal Justice. Upon receiving this degree, I worked as a correction officer for three years at Nassau County Detention Center. I also proudly served in the US Army. I moved to South Florida in order to advance my career and provide a better life for my son.

My bodybuilding career began at age 17, with the encouragement of Jimmy Amalino, a coworker at Bally’s Total Fitness, who inspired me to enter my first bodybuilding tournament, entitled Bally’s “Best of the Best.” The taste of victory motivated me to join All Natural Physique and Power Conference (ANPPC), which is a natural bodybuilding conference. I competed in one show with the ANPPC during the calendar year and won.

Later that year, I joined the NPC in order to test myself against some of the best competitors in the nation. I entered the Bev Francis Atlantic States Tournament which was hosted at Hofstra University in 1991. I took 2nd in the teenage category which qualified me for the nationals that year.