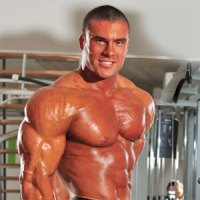 Started working out about 6 years ago (age 15) with a bodyweight of an extremely skinny 121lbs (same height). For the first 6 months I only trainied my upper body. I did the same routine every workout, about six days a week. Of course, I didnt know anything about nutrition. The only meal I had every day was breakfast, which consisted of a couple bowls of cereals. Still I managed to gain about 10kg (22lbs.) during that time.

After six months I realized that there must be something that I did not know… I spoke to my cousin, who used to be a trainer at a local gym and he showed me how to eat, train and use the right supplements. I also started working my legs. Within 9 weeks I gained another 22lbs!

I did my first show after about 2.5 years of training. Just turned 18 years old. It was a state-level show, the bavarian championships 2006, and I competed in the Junior heavyweights at 208lbs.

I was sick of being so skinny that everybody would ask me if I had some kind of disease. My mother even dragged me to a number of different doctors, including a psychologist, to see if there was something wrong with me. I also liked the thought of being a freak. When I was a kid I used to play with those He-Man action figures which were all packed with huge and totally freaky looking muscle. Big shoulders, big arms, tiny waist, huge legs… That`s what I had in mind for my own physique. I have kept some of those figures until today.

My cousin gave me a vhs tape that he thought that I would like. It was The Blonde Myth with Lee Priest. I watched it so many times that I knew the whole tape by heart. Lee seemed to be exactly what I wanted to look like, plus he was such a cool guy who showed no star attitude at all. I sent him an e-mail with a number of questions about diet and training, and he even answered all of them. I have never met him, but I hope I will one day, since I still have to thank him for all the great inspiration he provided.

There are numerous other guys that have inspired me, for example Art Atwood, Markus Rühl, Branch Warren…, but Lee was the first one.

Roman Fritz is the new Overall European Bodybuilding Champion and was awarded an IFBB Pro Card. Hailing from Germany, in...