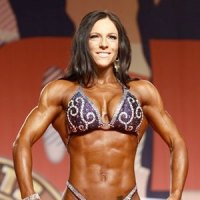 Trish Warren was born on the 9th June 1979 in Webster, Texas. As a young girl she was a small town country girl with big dreams. When she was seventeen she moved to the city on a cheerleading scholarship, which she done for 2 years until she decided to switch carerr and started to train for fitness competitions. She joined a small and hired a personal trainer, it was here where she met IFBB Professional bodybuilder Branch Warren, who is now her husband.

Trish went on to win her very first fitness competition at the 2001 Ronnie Coleman Classic, it was this competition that got her hooked to the sport and set her launch into the fitness industry.

Trish got married to Branch Warren on the 25th December 2005 and have helped push each beyond there goals. They opened a logistics company in 2006 with the money that Branch won at the Arnold Classic that year. This was an incredible investment for them and the business continues to grow still today.

In 2008 Trish qualified for her first fitness Olympia where she went on to place in the top 10 placing 9th. Determined to get a top placement she went on to compete in the Arnold Classic Where she managed to move up a few spots taking 7th place, still determined to win a Pro show she continued on to the New York Pro where she came in at a very close second.

in 2012, Branch Warren and Trish Warren were graced with a beautiful little girl.