He stood out wherever he went. Tanned and rugged with this trademark moustache and “Thee Animal” tattoo on his prominent deltoid, 5’11”, 210-pound Rod Koontz was a fixture of the 80s SoCal bodybuilding scene. Koontz’s career high point came in 1977 when he won the tall and overall titles at the AAU Mr. USA. Koontz went on to compete in several IFBB pro contests during the 80s. 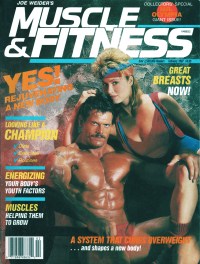 He resurfaced for the 1995-96 Masters Olympia, placing 12th on both occasions. During his heyday, Koontz got his fair share of exposure in bodybuilding magazines, even making the cover of Muscle & Fitness in September 1986 (with Gladys Portugese!) and February 1987.

According to a Facebook post by his son Eric, Rod was hospitalized for cancer in June of 2014. Earlier this January, Rod caught pneumonia and by April 8, his condition had deteriorated further. Sadly, Rod was unable to recover and passed away on August 25. Our thoughts and prayers are with his family and friends.