Before creatine, arginine and whey protein ranked supreme as popular bodybuilding supplements, the branched-chain amino acids were the hot ticket for bodybuilders. Today, BCAAs are back on the must-have list of supplements because bodybuilders have found that they work well to enhance muscle growth, strength, energy and even fat loss. If you’re not using them, here’s your guide to why you should.

The BCAAs comprise three essential amino acids — leucine, isoleucine and valine. The name “branched-chain amino acids” is derived from the structure of these aminos — each has a forked outcropping that looks a bit like a branch. How essential are these three aminos? Well, although there are about 20 amino acids that the muscles use for muscle growth, the three BCAAs make up one-third of the total amino acids in the body’s muscles.

What’s really special about these three aminos is how the body handles them. When you ingest amino acids (as individual aminos or as protein), they first travel to the liver, which immediately breaks them down and uses them for fuel if the body needs them for energy rather than for rebuilding muscle and other tissues. Yet, the liver tends to spare BCAAs, sending them directly to the muscles to be used for building muscle or for fuel.

The muscles can use BCAAs, unlike other aminos, directly for fuel. This gives BCAAs two unique properties. First, during workouts, muscles readily use BCAAs for fuel. Second, during rest, such as after workouts, BCAAs are used for building muscle. These are two important considerations when it comes to the timing of supplementation: they make pre- and postworkout the critical time periods for taking BCAAs. 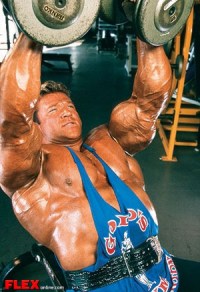 readily used for fuel by the muscles during workouts; thus, intense and longer workouts will rob more BCAAs from your muscles. To counteract this, take a BCAA supplement right before you train — because supplemental BCAAs are readily available to the muscle as a direct source of energy, your energy levels will be higher during the workout than if you had not done so.

Besides boosting energy levels by providing a direct fuel source, BCAAs also enhance energy through another mechanism — one that involves the brain. French researchers discovered that during exercise, an amino acid metabolite known as 5-hydroxytryptamine (5-HT) signals the brain that the body is fatigued, causing it to reduce muscle strength and endurance. The amino acid tryptophan is responsible for producing 5-HT in the brain, which the BCAAs, namely valine, compete with for entry. Several research studies have confirmed that taking BCAAs before workouts lowers the amount of tryptophan that gets into the brain, thus lessening 5-HT levels and fatigue. Therefore, BCAA ingestion can help to prevent feeling fatigued during workouts, which will allow you to train harder and longer, encouraging greater muscle growth. BCAA supplementation can also help to enhance mood and brain function by reducing brain fatigue through this same mechanism.

Click NEXT PAGE to see the next BCAA benefit! 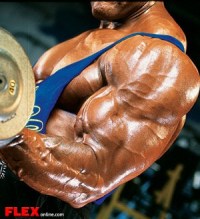 energy to train is important, but the BCAA benefit most interesting to bodybuilders is its ability to drive muscle growth. The supplements increase growth by directly stimulating muscle protein synthesis — the buildup of muscle protein (protein synthesis), one amino acid at a time, like building a brick wall.

Researchers from the University of Texas Medical Branch (Galveston) discovered that leucine appears to be the real key amino acid of the three BCAAs, as far as protein synthesis goes. Leucine acts much like a key in a lock inside the muscle that instigates the process of muscle protein synthesis. In addition, this amino boosts insulin levels. Insulin is an anabolic hormone that also stimulates protein synthesis, but via a different mechanism than leucine. That means leucine has a dual effect on protein synthesis. Although leucine is definitely the MVP of the BCAA team for stimulating protein synthesis, your best bet is to take leucine along with the other BCAAs. That’s because together, the BCAAs benefit muscle growth by other means as well.

Another way that the BCAAs enhance muscle growth is by facilitating growth hormone. A 2001 study from Italian researchers found that athletes taking BCAAs for one month had higher levels of growth hormone and growth hormone binding protein after exercise. GHBP is important because it acts as a carrier for GH in the blood, taking it to the muscles where it can do its job of instigating muscle growth.

In addition, another hormone that BCAAs affect is the catabolic hormone cortisol. A 2006 study presented at the International Society of Sports Nutrition’s annual meeting found that athletes consuming BCAAs had a significant reduction in cortisol levels during and after exercise as compared to those taking a placebo. This blunting effect on cortisol is critical because cortisol is a catabolic hormone that interferes muscle membrane, which is believed to initiate muscle growth. 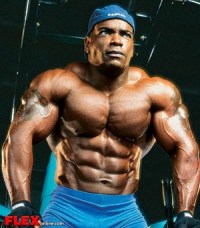 energy and growth aren’t enough, BCAAs have been found to stimulate greater muscle strength. A 2003 study from researchers in Rome, Italy, reported that men taking BCAAs for two days increased their grip strength as compared to those subjects who took a placebo. Greater muscle strength was also reported in leg muscles by researchers at California State University (Fullerton). After eight weeks of supplementing with leucine and whey protein (rich in BCAAs) and following a leg weight-training program, subjects experienced far with the anabolic hormone, testosterone, and encourages muscle breakdown. In fact, numerous studies have confirmed that athletes taking BCAAs have significantly less muscle breakdown after exercise and enhanced muscle recovery. They also experienced a reduction in delayed-onset muscle soreness, as confirmed by Japanese researchers.

Still another way that BCAAs enhance muscle growth is by maintaining higher levels of muscle glycogen, as University of São Paulo (Brazil) researchers discovered. Muscle glycogen is the storage form of carbs in muscle cells. Normally, muscle glycogen drops during a workout because it is used to fuel the muscles. This can compromise muscle size because glycogen pulls water into the muscles, keeping them full and large. Because supplemental BCAAs are readily used for fuel during workouts, muscle glycogen levels are higher after training. By sparing muscle glycogen levels, BCAAs work to maintain muscle size by keeping the muscles full. Fuller muscles place a stretch on the greater strength gains than those taking a placebo. Another study by Australian researchers reported in a 2006 issue of the European Journal of Applied Physiology that six weeks of leucine supplementation not only improved muscle power in outrigger canoeists, but endurance as well.

Click NEXT PAGE to see the next BCAA benefit!

A 1997 study of competitive wrestlers found that those who were supplementing with BCAAs while following a low-calorie diet experienced greater overall weight loss and bodyfat reduction, particularly in the abdominal area, as compared to test subjects who took a placebo.

Of the three BCAAs, it may be leucine that provides the majority of the fat-loss effects. A 2006 study by Brazilian researchers reported that leucine supplementation for six weeks significantly reduced bodyfat. They proposed that the increase in protein synthesis stimulated by leucine likely increased energy expenditure, which could help to burn more bodyfat. 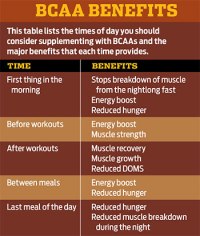 appears to directly influence the brain to decrease hunger, as University of Cincinnati researchers reported in a 2006 issue of the journal Science. After injecting leucine into the brains of rats, they found that the animals ate less and gained far less weight than those receiving a placebo. They theorize that in the brain, leucine levels are an indicator of amino acid levels in the bloodstream. Therefore, supplementing with leucine throughout the day may trick the brain into thinking that you have ample energy (in the form of amino acids) available and therefore don’t need to consume as much food. This can lead to a significant reduction in hunger when you are dieting.

With all the benefits of BCAAs, adding them to your regimen should be an easy choice. Yet knowing how and when to add them to your day can make all the difference in the benefits you experience. FLEX recommends about 5-10 grams of BCAAs per dose. We also recommend at least four doses per day. These four doses should be taken first thing in the morning, within 30 minutes of working out, within 30 minutes after working out and with your last meal of the day. – FLEX