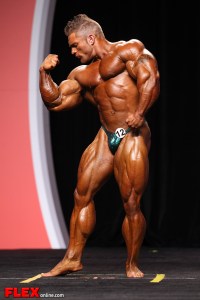 with little or no weight. Normally, this isn’t the way to blow up a bodypart to the limit, but stubborn calves can be a different animal. For James “Flex” Lewis, it’s a training principle he uses to max out calves that prompted opinionated pro Milos Sarcev to describe Lewis’ legs as “world class” when he first met the phenom at age 20.

A native of Wales, Lewis has been spending increasing time in the States since 2004, and trained a lot at Sarcev’s Koloseum Gym in Fullerton, California. Although Lewis gets the most comments about his calves and forearms, he suspects “that’s down to the fact that they’re the only things I show when I’m training.”

Lewis is a bit of an innovator in the gym, especially when it comes to training calves. Following a philosophy he has termed “hybrid training,” his goal is to keep blood in the calves through quick, almost-nonstop straight-leg calf movements in three snappy rotations. Lewis had used more conventional heavy calf training in the past, but after experimentation, he realized the benefits of perpetual motion for his own development.

Twice a week, Lewis bangs out the session after his quad or hamstring workout. He emphasizes the importance of stretching calves before diving into the workout, because once you get started, there’s no turning back.

All of the movements in the workout are meant to stress the gastrocnemius muscle as opposed to the soleus, which lies beneath. Straight-leg calf raises lead to gastrocnemius growth; bent-leg raises hit the soleus. 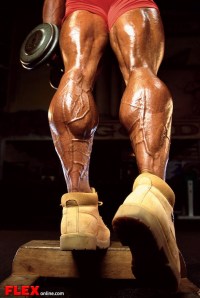 on a leg-press machine start the first rotation of exercises in the hybrid workout. Lewis pyramids his weights for this movement, which features a short range of motion. With his feet placed shoulder-width apart, he quickly presses the platform to a full extension of his toes. Hopping off the machine and stepping onto a three-inch block high enough to get a full stretch to the floor, he reps out on non-weighted raises before stepping off the block and doing a fast-paced set of raises from the floor. The first rotation comprises four trisets of 30 reps of each component.

The next rotation is one Lewis deems “a giant set from hell.” Try it and you’ll see why. Taking as short a rest as possible, the second group of exercises starts with 15 reps on a standard standing calf-raise machine.

Using a bit of ingenuity, Lewis created the leadoff movement for this second giant set while training at Koloseum. 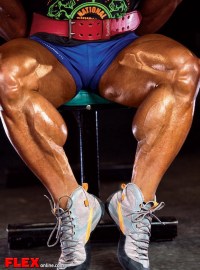 On a standing calf-raise machine with two levels, he does two-step raises, which look much like climbing up stairs.

After the two-step raises, Lewis completes the giant set with calf raises from a weight plate, from the base rail of a machine and from the floor for 15 reps apiece.

Finally, with his last stash of energy, he’ll return to the exercises in the first rotation to complete his calf workout. 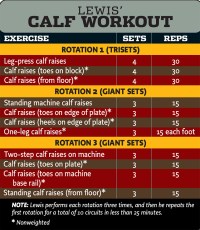 to take an instinctive approach to his training, even though his instincts turn dark, considering that he’s such a pleasant and humble physique star in the making. “I do so many sadistic things for legs,” he says. “My calf training is crazy.”

Lewis lives for the pump he gets through his unique calf training strategy. “The last couple of reps, my calves are full of lactic acid, and they tend to cramp up while I’m driving home. The next day they hurt, but the day after that, omigosh, you can forget it. They’re killing me.” That’s probably why Lewis recommends such accelerated movement in the gym; he has to slow down to recover for the next hybrid calf roundup.

Use these tips to get the most out of Lewis’ workout.