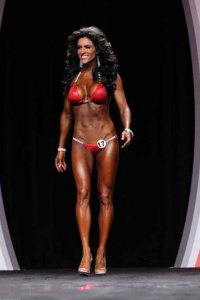 Amanda Latona is no stranger to the stage, after all she first graced it (and many across Europe and the U.S.) as a recording artist.

It was in the gym though that Latona hit a high note, so she took her love of being onstage and fused it with her other passion, fitness. Latona entered her first show in 2003 and won.

2007 was when her career really started to pick up; winning two regional titles, while placing first in the Model America Championships, and grabbing a top-10 spot in the first-ever FLEX Bikini Model Search. Winning every show she entered in 2009, Latona received her IFBB pro card making her pro debut came in March 2010 at the IFBB Muscle Contest Pro Bikini Championship, where she earned third place. When not competing, Latona works as a fitness model.

This royally-intense program will max out your muscles.

More on the royal couple.