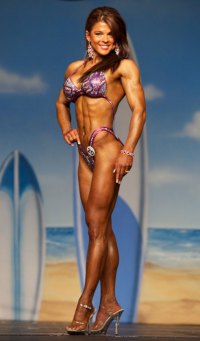 Ann Titone is the epitome of anything is possible.

She has gone from surviving a life-threatening car accident, in which the jaws of life had to be used, resulting in a two-week coma and months of physical therapy to an IFBB Pro. According to her doctors, if Titone were to make it through the night her life from then on would be difficult.

Alas, Titone is a fighter, with only the strongest of people backing her. After the accident, she

became serious about getting in shape and being healthy, which of course led to competing. Titone’s first competition was in 2007, the GNC Indiana Regional, which happened to be bigger than she had anticipated, when all was said and done, she placed third. Her next competition, the Missouri State Ozark Championship, Titone took first place in her class.

She went on to receive her pro card at the 2009 Team Universe and compete in some of the biggest competitions out there.

Nancy DiNino catches up with Ann Titone after her 4th place finish at the 2014 Figure Olympia.