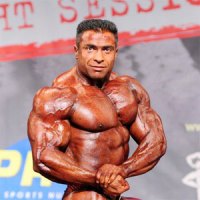 According to Baitollah Abbaspour, “Only your full focus on body and soul can lead you to perfection.”

From the looks of it, Abbaspour’s focus has led him to that very perfection. He began lifting  in 1996, and with the support and guidance of his brothers, he transformed his physique into an impressive one. A year later, he took his first title in the Karaj Championship. Abbaspour went on to earn his Pro Card at the 2003 World Bodybuilding Championships in India.

Abbaspour, who has a law degree,  owns and operates his own gym, where he trains others in the art of focusing on perfection.

Behind the Scenes: Baitollah Abbaspour Trains Legs the day after the 2014 New York Pro.