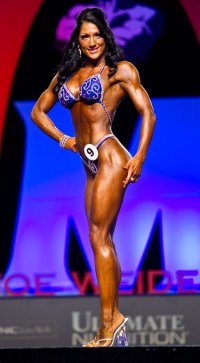 Candice Keene was never the type to set goals. That was until 2008 when she took on two very big ones at the same exact time — training and higher education.

Keene became interested in fitness and nutrition around 2005, by the time 2008 rolled around she was weight training consistently, paying attention to what she ate and had signed up for her first figure competition, a national qualifier. Keene didn’t have any expectations going into the event, but she left with first place in her class, as well as the overall title.

Nationals was two weeks later, so she told my trainer Jamie Ibone that she wanted to do it, all the while taking full time classes, juggling studying and training. At that event Keene earned her pro status; and discovered her passion. From that point on she became hooked on setting goals.

Keene continued her studies and training, taking even more title. According to her, managing the two at the same time has given her the structure and balance needed to become a winner.

Nancy DiNino talks to Candice Keene after she places 2nd at the 2014 Figure Olympia.

Keene to take the Win!