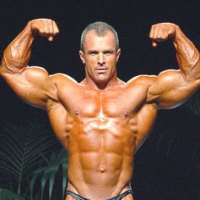 I was born 7th July 1972 in Sydney Australia and grew up on a farm in Orchard Hills an hour west of Sydney at the foot of the Blue Mountains. I was always around animals and nature. A lot of my time was spent alone working on the farm tending the vineyard, feeding the animals and keeping the place in order.

I loved playing sports but was never taken to training because it was a bit out of the way so I trained on my own for swimming, athletics, long distance running and gymnastics whenever I got the chance at school or at home.

From an early age I was interested in human performance, nutrition and biology. Because of my interest in these areas I excelled at them topping my year in biology, human performance and also won the sportsman of the year.

At the age of sixteen I began bodybuilding and although I had a very small build I quickly excelled at it because of my passion, dedication and also my knowledge of the human body and how it functions. All the heavy manual work on the farm really helped as well as it gave me a good base to build on.

After about a year I entered my first contest and won. It was the Teenage Mr. Western Suburbs. I competed a week later and won again. Then a week later again! Wow I had found something that I was good at. I realized that I had what it took to be a bodybuilder. I was quite small and thought I was going to get my butt kicked but began to realize that it was not just about being big but about symmetry and definition as well. Anyhow the week later was the big one, the Teenage Mr. Australia. I was totally exhausted from doing three comps in a row but I held my condition and ended up winning. The feeling was great. This helped me decide what I was going to be spending my time doing for the next few years.

At this stage I began to get a bit bored of the sport because I was so focused on it and did not allow any other activities or interests in my life. I was a bit of an extremist. There were so many things that I wanted to experience in life so I gave up bodybuilding and opened up a gym and dance center in the city of Sydney.

I tried all the activities which we ran there. They included dancing, singing, acting, yoga, boxing, wrestling and many more activities. I even went in the City to Surf which is a fourteen kilometer run from the city to Bondi beach. My body weight was only 165 lb (75 kg)! What a difference from my current off season bodyweight which is up to 265 lb (120 kg).

After eleven years off bodybuilding and doing all these activities I realized that bodybuilding was still in my blood so at the age of thirty three I decided to make a comeback and compete again. Over the last two years I have put on 66 lb of muscle and have won the Heavyweight Mr. Australia, the Super Heavyweight Mr. Australia, the Elite Mr. Australia and also turned pro. I am so grateful that God has given me another chance. I thought well if the legendary Ed Corney who started when he was thirty seven could become a great champion then I could continue to follow my dream at thirty three.

I now spend a lot of my time between Thailand and the U.S. training and competing. There is one other thing that I would like to include and that is I have had so much support from so many good friends and acquaintances that have made my journey so much easier. I am not going to start naming them because the list is too long. I am so grateful for all the help and support that I have had. I have been blessed to have these people in my life.