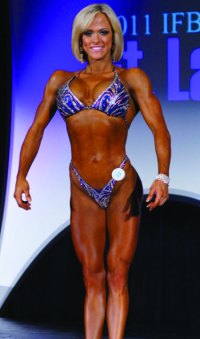 Gennifer Strobo had been volunteering at a local bodybuilding and figure show, when she was first drawn to the sport.

She was amazed by the shape the women had perfected, how they had remained thin, but still accumulated quite the muscle mass. Strobo was then amazed once again when she found herself at the gym following routines similar to the women she had seen on stage. Thirteen weeks later, Strobo, a former physical education teacher, was competing.

At her first competition, the 2007 Battle of Biloxi, Strobo took first in her class. Strobobegan competing at the pro level in 2009 and has since taken first at the 2011 Toronto Pro Super Show and 2013 Powerhouse Pro among others.

Strobo who is inspired by her daughters, has found that not stressing over every detail, every second of the day has made her enjoy this journey that at many times challenges her.