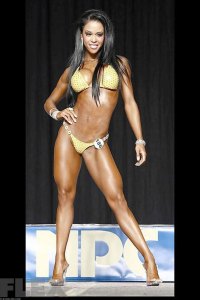 India Paulino made her mark during her first competition, the 2010 NPC Ft. Lauderdale Cup where she won the Novice Overall category and placed second in her class.

A year later, the former police officer had her pro card in hand. In her second pro show, the 2011 IFBB Jacksonville Pro, Paulino placed second and qualified for the prestigious Bikini Olympia. She went on to win the 2011 IFBB Ft. Lauderdale Pro and placed in the 2011 IFBB Miami World Pro.

But 2012 was Paulino’s year. She won the IFBB Pittsburgh Pro, IFBB New York Pro  and IFBB Miami World Pro, while earning  top-three finishes at the Arnold Classic Bikini International and the Bikini Olympia.