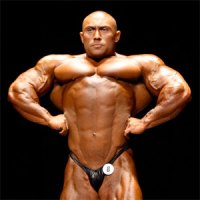 As a teen, I worked as chef for a restaurant for 4 years until Jeff hall hired me to work at his nutrition and smoothie shop. In 2006, I competed in the Southern States, as a heavy weight where I took 1st
and overall. In 2007 I opened my own store, Elite Nutrition and Smoothie. It was now time to earn my Pro card. After competing on a national level for 2 shows I was contacted by Art Atwood who saw
something in me and thought I had the genetic and mental potential to be great. Art took me under his wing to take on the 2009 USA’s where I went up a weight class and placed 5th. He invisiond my future as a
bodybuilder in what he liked to call a “Super Freak”. A Physique where mass meets beauty and asthetics. The following year we came up with a plan to pack on enough size to totally dominate the competition, he deemed it operation “Super Huh”.

That offseason was one of the best ever, I learned tons of priceless info from Art. In 2009, I met Jessica as she was preparing for the 09 Nationals as a figure model to take her pro card. We hit it off from
the start! I helped her with her national’s prep and we fell in love. In 2010, I claimed my Pro Status at the 2010 USA’s where I took 1st in the superheavies weighing in at 256lbs. In the fall of 2010, I
proposed to Jessica. In 2011, I teamed up with Hany Rambod as my coach in my preparation for my pro Debut. I took a disappointing 8th place at the NY Pro and 7th at the Tampa Pro.

Maintaining balance in my life, I married the love of my life on the rim of the Pacific Ocean in Costa Rica on 11/11/11. A week later we had a traditional Korean wedding ceremony back in the States with the
rest of the family. Now as an IFBB Pro, business and family man my goal remains to one day be one of the best bodybuilders the world has ever seen and to maybe some day carry the responsibility of being Mr.
Olympia. I am committed to challenging the status quo as have many great artists before me by visualizing and listening intuitively to my body. The goal: A physique where mass meets beauty and aesthetics.
And so it is…

In his brief pro career, he always had enough monster mass to make you think, "huh?"

Flex Magazine Paparazzi at it's finest!

Jason Huh Interview at the 2012 PBW