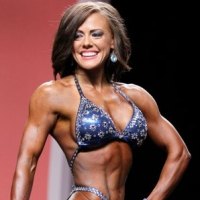 I grew up in a house full of boys, and with three brothers, there was never much time for barbies or tea parties. Most of my time was spent outdoors getting dirty or building forts. As I grew up, I tried playing many different sports with varied success, never finding one that was perfect for me.

During college I was introduced to rock climbing, and it quickly became an addicting hobby. What’s better than combining the outdoors with strength training and danger? It was the danger part that I should have taken more seriously.

In 2009, I took a fall that resulted in two broken ankles, surgery, and a very long recovery. It was depressing as I slowly watched myself become out of shape while laid up in bed. After a few weeks I ventured to the gym to try weight training my upper body while my ankles continued to heal from surgery. It was slow going at first, but I created a three day split for my upper body.

After two months, I could not believe the results! From that moment forward I was hooked. I read books, articles, magazines; everything under the sun about nutrition and the sport of bodybuilding. In the months to follow, I became a certified personal trainer and began my experience of working in gyms and bettering peoples’ lives.

In 2011, with the help of my coach Tracey Greenwood, I began competing in figure bodybuilding. I feel blessed to have had such great success in the sport. I look forward to continued progress in the sport that I love.

From Amateur to Olympia Stage in 3 Years