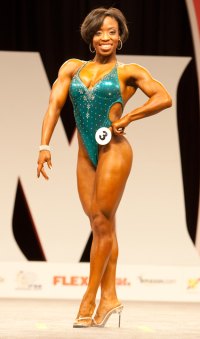 Nicole Duncan may be known around her hometown as an Atlanta Falcons Cheerleader, but on the IFBB circuit she is known as the girl with the highest flying routine.

Duncan who began competing in 2002 has relied on her years of gymnastic training and those four years she spent cheering for the NFL, to launch her from NPC to IFBB.  Duncan received her pro card in 2006. Once she had it though, she realized something about her goals. She had been competing solely to win, now she’s driven by other motivations.

Duncan, who coaches young gymnasts, dancers and cheerleaders, hopes to encourage other women to go for their dreams.