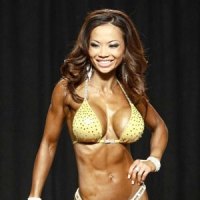 If it weren’t for a high school weight training class and a friendship with a nationally ranked powerlifter Noy Alexander may not be where she is today.

Alexander began competing in 1999, ultimately taking the Miss Designer Body title. With a few events in her pocket, she choose to follow a different path, eventually finding her way back to the competition circuit in 2008. The following year, she embarked on another path, this one leading her from bikini to figure.  By 2010 she was back to bikini and had her sights set on a pro card, which she earned in 2012.

Alexander continues to compete while fulfilling her commitment to her clients she trains, which is to instill discipline and dedication. Her passion for pushing physical and mental limits have given meaning to life.

11 facts about this bikini beauty