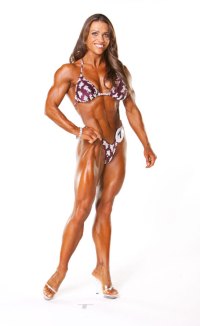 Oksana Grishina  would do just about anything to compete.

At age 7, a late start for gymnastics, Grishina began taking rhythmic gymnastics class.  After a few months of training, she placed third in her first competition. By the time she had turned 10, Grishina’s family had sacrificed a lot to keep their daughter in classes, with her

spending countless hours commuting back and forth on foot and by bus between home, school and gymnastics.

Fitness had become Grishina’s life by the time she graduated college in 2000, earning a degree in Physical Training and Sports.

When the first gym opened in her town in 2002, a friend suggested she work as an instructor, at which point her coworkers convinced her to give competitive bodybuilding a try.  She spent several years working as a trainer and manager in sports clubs while quickly rising to the top of competitive fitness in Russia.  In 2005 and 2006 Grishina was awarded the title of “Best Non-Olympic Sportswoman of the Year” in the Kaliningrad Region, while winning fitness competitions on the international stage at the European and World Championships, finally earning her IFBB pro card to compete in the 2007 Olympia.

After 12 years of gymnastic competitions and 6 years of fitness competitions, she still feels compelled to try to improve as an athlete… to do better, to be better.

The four-time champ is back, and she's had ample time to get better than ever.

Oksana Grishina to Make a Comeback

The four-time Fitness champ will appear at the 2020 Olympia.

The winning routine of the 2017 Fitness International champion!