However you attempt to get it done, the fact remains that the molecular key to unlocking the door to muscle-size gains, one way or another, must result in increasing the volume of the muscle cell from the inside. Under the appropriate stimulus, the muscle cells take on fluid and thus increase in size. The regulation of this volume is obviously governed by exercise because no matter what you do, muscles won’t grow big without it. But at the cellular level, it really comes down to understanding how exercise influences muscle cell volume and what specifically we can do to augment and amplify those results.

Research confirms that there’s a distinct and very tightly balanced system whereby the body influences control over muscle cell volume. Intracellular “impermeant” solutes are the molecules that exist inside each muscle cell but are unable to freely pass in and out of the cell. That’s because they’re either too big in size (stearic) to make it out of the cell or because they’re particles charged (ionic) in such a way that they’re repelled away from the internal surface of the cell membrane and back into the sarcoplasm (the cytoplasmic water-based fluid that fills the cell). These particles influence muscle size because they “attract” water into the muscle cell from outside the cell and cause it to swell. This free water is supplied by way of the bloodstream and is free to pass into and out of the cell depending on need.

While water may not passively flow in and out of the cell without impetus, the body can metabolically govern the influence particles that water follows by actively pumping them in and out of the cell. The body exerts muscle cell size control in this way by balancing passive solute and water fluxes that would otherwise cause muscle cell swelling under the influence of these solutes. Further control is exerted by way of solute transport processes adjusting muscle cell volumes by actively pumping permeable particles into the cells. So water follows particles.

Particulate matter—which water follows and thus results in larger muscle cells—is controlled by a number of extracellular factors, which can be manipulated and controlled to some degree. They include diet, dietary supplementation, medications, tonicity, pH, as well as pressure gradients. The effects of such alterations in the extracellular environment produce intracellular changes that occur in exercising muscle. The contributions of these controllable cofactors of exercise in boosting muscle cell volume are described herein.

To begin with, some parochial but popular articles I’ve read, often by non-physicians, simplistically underscore the preeminent importance of adequate hydration for maximum cell volume. But I’m really going to spare you a lengthy discourse on what I see as inane drivel over water intake. Of course nothing happens without adequate water intake—that should be innately obvious even to the densest of toothless morons. Why these paperweight pundits spend so much time talking about water is beyond me. Clearly a water-depleted state will not only impede muscle cell volume, but will be profoundly unhealthy because it depletes all the cells in the body. In other words, if you’re seriously dehydrated, you have way bigger problems than your biceps not being full enough.

On the flip side, massive water drinking doesn’t build muscles, either. So those who make hyper-hydration a priority represent nothing more than the blind leading the blind. So spending too many more words on that is a waste of your time. I’ll continue on with the assumption that it’s obvious that one needs adequate hydration for any cell volume enhancing technique to have any impact, and that excess hydration won’t produce anything more than a few more daily trips to the nearest urinal.

Click NEXT PAGE to learn about increasing CELL VOLUME! >>

Of course, calcium is critical for muscle contractility and magnesium for membrane stabilization. But sodium and potassium are at the epicenter. Each muscle cell uses these two primary electrolytes bathed in water to maintain what is called the “resting potential” of the muscle cell membrane. Just as a battery has an electrical potential difference at its two poles, a muscle cell also generates a potential difference across its cell membrane by utilizing sodium and potassium. Installed in each muscle cell membrane are sodium potassium pumps. These pumps maintain a relatively lower concentration of sodium and higher concentration of potassium in the intracellular space when compared with the extracellular space.

The potential electrical difference is what cocks the proverbial trigger back on the muscle so it’s ready to fire (contract). While this batterylike charge difference between the inside and outside of the cell must always be maintained until contraction and quickly restored at almost precisely -75mV, there’s nothing preventing the body from building a slightly bigger battery. Taking in liberal amounts of sodium and potassium can theoretically amp up the muscle cell volume.

But before you start gobbling extra soy-sauce-soaked Chinese food and busting your gut with a banana bunch, just know that too much sodium or potassium can be problematic. The perils of excess sodium intake are a concern for those with blood pressure or kidney issues; and excess potassium can itself be dangerous, as it can influence electrical conductivity of the heart muscle. So while it seems electrolyte loading may enhance muscle cell volume, think before you leap. 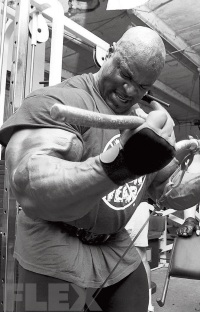 The classic specialized plasma osmolyte among bodybuilders is creatine monohydrate. Adenosine triphosphate (ATP) is the currency of energy in every living cell within the human body.

For many years, because of an early association with muscle cramping in athletes, it was thought that creatine dehydrated the body. But the truth is that this was due more to athlete fluid intake being insufficient to keep up with the third-space shift of fluid inside the cells. Once hydration is adequate, there’s usually no more muscle cramping than one would normally expect.

Not surprisingly, creatine is not the only natural, effective, common, and easily consumable specialized plasma osmolyte. The amino acid taurine is another example. Taurine is essential for the function of muscles, as it assists in keeping potassium and magnesium within the cell while keeping excessive sodium outside.

Kaatsu training (as it’s known in Japan), otherwise known as the “tourniquet method,” involves actually placing an occlusive band or strap around the proximal aspect of the limb of the target muscle and then training that muscle. In perhaps one of the most peculiar forays into extreme muscle building techniques, nearly two decades ago Japanese researchers showed us that using this kaatsu method during training actually resulted in enhanced muscle size and strength gains.

While theories abound as to why this actually works, it’s still a bit of a mystery that may be related to a pressure-induced expansion in cell volume. A Canadian study showed that the technique does cause changes in neuromuscular function in such a way that each contracting muscle fiber worked with a forced higher level of contractility. As to whether this mechanism is driven by an increase in cell volume, this is something research has still not confirmed.

The theory is compelling, and the supporting pundits are out there. My only problem with kaatsu training is that it just seems potentially dangerous and thus nuts to me. Don’t forget, I’m a physician—a real one who’s spent countless hours taking care of real patients. In that world, tourniquets are used to find veins to draw blood or insert catheters for IVs. Tourniquets just don’t seem like they should cross over to my equally wonderful but very different world of bodybuilding. Sure, I’m open to new techniques, but only if they’re reasonably safe in the average person’s hands. Cutting of venous blood return to a pumping muscle in order to expand that compartment and cause more blood stasis and cellular swelling seems like something that must be approached with great care—or not at all.

Excess acid load tends to deplete the body of electrolytes. As a result, helping to counter excess acid can reverse this process, and in this way preserve and even enhance muscle cell volume. We know that, in conditions such as kidney failure, a resultant metabolic acidosis results, which causes an accelerated loss in muscle tissue. 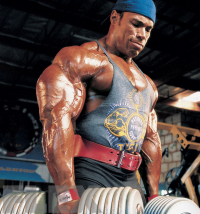 We also know that in conditions where muscle loss is steep—as with diabetics suffering diabetic ketosis, severe physical trauma, overwhelming infection, and emphysema—countering the acidosis preserves muscle mass. Alkalinizing the diet also improves the sodium and potassium ratio, which itself reduces muscle wasting.

Of course, the problem bodybuilders face is that what they do in hard training produces periodic and regularly elevated lactic acid, resulting in a temporary metabolic acidosis, which the body must clear and normalize.

Add to that, a typical bodybuilder diet is rich in meats and heavy amounts of protein. By itself this produces a tremendous acid load. Since no bodybuilder could ever be expected to give up protein and become a vegan, the more reasonable approach to buffer the acid load is simply to increase the fiber in the diet to at least offset it.

Some bodybuilders I’ve seen over the years have convinced themselves that sipping five grams of baking soda in water enhances the size and fullness of their muscles. It’s never become widespread, though, because it’s such extreme behavior: Ingested baking soda can cause everything from gastric upset to even panic attacks. I’ve never tried it, and never will. Moreover, though the theoretical strings are there to connect, there has yet to be any conclusive proof to show that acid buffering can either directly or indirectly boost cell volume.

In the end, whether you wish to do nothing at all along these lines, augment cell volume with standard electrolytes, or even dabble in specialized osmolytes, you now have the information. So the choice is yours. Of course, kaatsu training and acid buffering are always a possibility for those “loose cannons on deck” who care to taste from the risky cup of self-experimentation. Finally, unfortunately, there’s oxymetholone abuse, which is reserved for the bigger, more profoundly disturbed idiots out there who refuse to learn from the smaller idiots who came before and made the same catastrophic mistake.

Either way, as I said, at least you have the facts. Doc loves you! FLEX