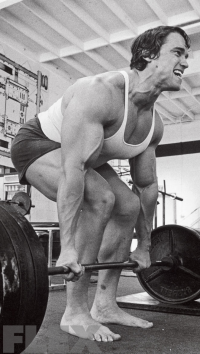 Gold’s Venice was, and still is, the mecca of bodybuilding, because the energy that flows through it makes it unlike any other place you could ever train. Its founder, Joe Gold, started the gym in 1965 mainly as a place for his friends to train. If you couldn’t afford a membership, Joe usually waived the fee. He even let bodybuilders sleep on the roof if they needed a place to stay.

From the moment I first walked in, I felt inspired to train harder, and the overhead skylights and ocean air that wafted through gave me the charge to do so. There was always some big animal training—Ken Waller, Frank Zane, or Dave Draper—and these guys not only inspired me but also ultimately became some of my best friends, and remain so to this day.

Gold’s is celebrating its 50th anniversary this year [Editor’s Note: Go to goldsgym.com for details on Gold’s 50th birthday bash], and I’ve watched it expand to become not only the most recognizable gym franchise, but one of the most iconic brands in the world as well. Come in almost any weekday morning and you’ll still find me training there.

I’ll give you one more fun fact about the old Gold’s: The gym was very small, so the showers used to be co-ed! – FLEX