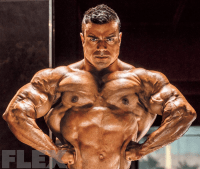 Futebol—aka soccer—is not just the national sport of Brazil— it’s the national obsession. The youngest of two boys, Brazilian native Eduardo Correa excelled at soccer and earned his way onto a prestigious teenage team. When he began toiling with weights to improve his futebol fitness, he realized quickly he liked barbells more than checkered balls. Naturally strong, he competed as a powerlifter. And, when his rapidly expanding musculature slowed his quickness, he gave up the soccer pitch for the gym. At 19, he entered and won his first bodybuilding contest, and his future came into focus. 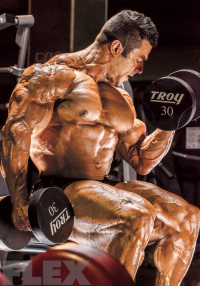 Despite his youthful foray into powerlifting, hoisting the heaviest metal was never a priority for Correa. From the beginning, weights were only a means to an end. He wanted to be a bodybuilder. “Don’t worry about the amount of weight,” he says. “Keep the focus on getting a full stretch and contraction. Your strength will improve with time.” His reps vary, depending on the exercise, but he almost never goes under 10, and he sometimes goes as high as 20 on a routine’s final set.

As for the three powerlifts, typically the only one Correa still does with a barbell is the squat. But you would never confuse this for a “power lift.” He prefers to squat (for sets of 12) last in his quad routine, after his legs are pre-exhausted with other exercises. This limits the number of plates he can use, and it allows him to better target his quads. He does bench presses with dumbbells or a machine (for sets of 12 to 15). And, because his back depth is superb, he seldom needs to deadlift. Nevertheless, he explains the “bodybuilder way” of pulling deads, which helped thicken his rear shots nearly seven years ago. “Too many people just pull,” he says. “I always focus on contracting my scapula back from start to finish to target more my inner back.” 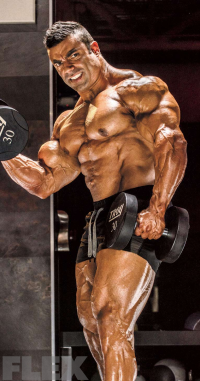 When you look at Correa’s workout routines, one of the first things that jumps out is the variety with which he attacks muscles. He does six exercises for his superb back, and they’re a diverse lot: two types of pulldowns, T-bar rows, one-arm dumbbell rows, machine rows, and pullovers. For biceps and triceps, he does four exercises each, and again the lifts selected are about as varied as possible. In targeting both sides of his arms, he uses dumbbells, an EZ-curl bar, a cable, and—for triceps—dipping bars. “A common mistake is choosing exercises that are too similar,” he says. “If you want to bring out all the qualities of body parts, you have to work them with a wide variety of exercises.”

In addition to a high volume of exercises, Correa also switches those lifts and their order on a regular basis. Ask him his workout one month and it may be completely different than it was the month before. Another thing he does to alter the geometrical angles hit by exercises is regularly change his grip (for upper-body exercises) or stance (for leg exercises). For example, he might do machine rows with an overhand grip one workout, a parallel grip the next, and an underhand grip the third workout. Each variation allows him to stress his muscles in slightly different ways.

“One of my favorite statements is you can buy the best food, supplements, and equipment, but the one thing you can’t buy is time,” Correa states. “And time is the absolute most important component in bodybuilding.” It’s a basic biological lesson. Your muscles don’t want to grow rapidly—at least after those first months of beginner’s gains (and assuming your nickname isn’t “Big Ramy”). Correa may have been an overnight sensation in 2009, but in actuality it was 11 years from his first real workout to his pro debut victory—11 years of muscle-making meals and workouts, over and over again, day after day, year after year.

The other biological lesson that all bodybuilders learn is that not all muscles grow at the same rate. For Correa, his lower half trails his upper half. (This is in regards only to size. Come contest days, his legs are every bit as sushi-sliced as the rest of him.) Correa combats this by placing special emphasis on his weaknesses. He trains his legs twice as frequently as his other body parts, sometimes hitting his hamstrings and quads separately, each twice weekly, and sometimes (as in the split included here) working them together in two weekly workouts.

After surgery to repair a severed triceps tendon, Correa now places a greater emphasis on stretching, warmups, and listening to his body’s feedback from rep to rep. “I had to learn how to focus on more efficient ways of training and recovering,” he says. “But the most important thing is listening to your body so you know when to push for that extra rep and when to back off.”

When you behold Correa’s contest physique, two things stand out—the high-def detailing and the 3-D depth. “I find that mind-to-muscle connection helps me bring out the quality of the muscles,” he says. “And getting that, like a lot of things, takes time. You have to work at it. You have to consciously think about the muscles or areas of muscles you want to target when you do each exercise. Forget about the weight’s movement. Focus on the tension.” 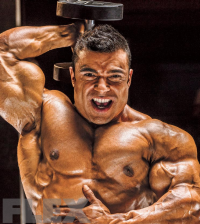 Correa places a special emphasis on contractions. For example, when he does dumbbell shrugs, he’ll hold each contraction (when his shoulders are at their highest) for two seconds. He’ll do the same on reps of cable crossovers, pausing and tensing when the handles come together and also visualizing himself crunching a most muscular. Flexing against resistance stimulates more muscle fibers, and it further strengthens the mind/ muscle connection.