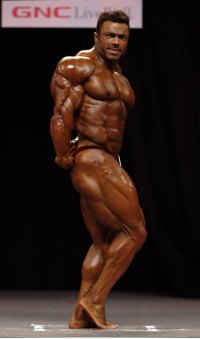 Eduardo Correa (full name Eduardo Corrêa da Silva) was born in 1981 in Florianópolis, Brazil.  Eduardo was very active as child, especially in the sport of soccer.  As a teenager, he joined a gym and began weight lifting as a way to imprive his soccer performance.  From there he moved on to powerlifting and discovered his love for bodybuilding.  At the age of 19, Eduardo entered his first bodybuilding competition and won 1st place.  The next year he went on to win the Brazilian National competition and Mr. Universe, Nabba.  In 2003, Eduardo came to the US, where he continued competing in in the sport of bodybiulding.

In 2007 Eduardo won the IFBB World Championships and earned IFBB pro status.  A year and a half later, at the age of 27, he made his IFBB pro debut at the Pittsburgh Pro in the 202 division , where he won 1st place and qualified for the 2009 Olympia 202 Showdown.  Eduardo placed an impressive 3rd at his first Olympia and went on to place 3rd at the 2010 and 2012 Olympia 202 Showdowns as well.  Now he is preparing for the 2013 Olympia 212 Showdown, where the weight limit has been increased, allowing the athletes to bring an additional 10 lbs of muscle to the stage.

Back Training with Eduardo Correa

9 exercises to build mass and bring out the detail in your back.

Eduardo Correa Behind the Scenes

and his full biceps and triceps routine.

The full posing routine of Eduardo Correa at the 2015 Arnold Classic 212.

Dennis James interviews Eduardo Correa at the Meet & Greet with the IFBB Pros.