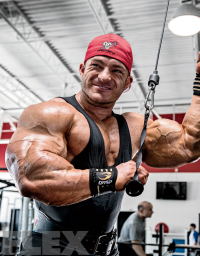 3 IS THE MAGIC NUMBER.

Quick history lesson. From 1974–79, the Mr. Olympia featured lightweight and heavyweight divisions. Franco Columbu won the first three under-200-pound clashes, and Frank Zane took the last three. Jump ahead to 2008–11 and the Olympia 202 Showdown. After David Henry won the inaugural title, Kevin English took the next three. In 2012, the division limit was bumped up 10 pounds. This is Flex Lewis’ domain. He’s collected all three 212 O titles, so far. Click here to see his Olympia gallery!

Flex is doing it his way. The Welsh Dragon and his nutritionist/trainer Neil Hill have fresh ideas about working out. From rep ranges to rest to exercise selection, the 212 champ doesn’t do things the same old way, because he doesn’t want to achieve the same old results. No, he’s striving for the ultimate. Rep after rep, set after set, Flex Lewis is reaching for his place in history. Three is the magic number, but 10 is the number of components that make his training unique. 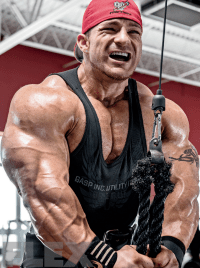 Before we can discuss the next nine things, we need to start by saying if you write a rule for Lewis he’s likely to tear it up and write another. Change is crucial to his program. In fact, it’s the very essence of Neil Hill’s Y3T (Yoda Three Training) system. Y3T dictates that you cycle through three different styles of training. It works like this. The first week the focus is on compound basics for sets of 6–10 reps. Week 2 you do compound and isolation exercises for 8–12 reps.

The third week is an all-out, high-rep, high-intensity barrage of supersets, dropsets, and extreme pain. Then the cycle starts again. Y3T is still the cornerstone of Lewis’ training, but, at the 212 king’s advanced level, he switches up when and how he attacks his muscles more than the standard Y3T protocol.

The Welsh Dragon flips the script to focus less on his strengths and more on his weaknesses, all with the goal of attaining ideal proportions. His pluses and minuses have altered through the years precisely because his neglect-subject-perfect plan works.

When Lewis first burst on to the bodybuilding scene in 2004, his lower half greatly exceeded his upper. What did he do? He rarely trained legs. For extended periods, he went nowhere near a calf machine or squat rack. Neglect strengths. Simultaneously, he used the extra time and energy to focus more on lagging areas like arms. Subject weaknesses. More recently, his arms have grown so much that he can curtail their training. And now after laying off legs, they need his typical all-out workouts to bring them back in balance. All of this is with the ultimate goal of perfect balance.

Over the years, Lewis has done a lot of hard labor in power racks. He knows deadlifts are considered hardcore while rope pushdowns are supposedly softcore. He just doesn’t care. He’s going to do what best stimulates his muscles. That might be rack deads or it might be a row/contraction move he creates on the fly. And he might do them both in the same workout. The Welsh Dragon’s object is to push his muscles to new limits and thus force their expansion. If he does that with high-rep giant sets at a cable pushdown station then so be it. He’ll take what is traditionally thought of as softcore and make it hardcore via his zest for journeying deep into the pain zone. 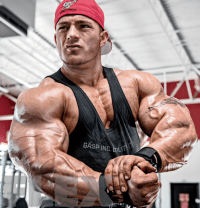 “So, all told, including warmups, I’m doing either 400 or 500 reps for triceps in short order,” Flex states. “Afterward, my triceps are already fully pumped, and I’ve spent a lot of reps targeting strong contractions to really focus on my tri’s.” For comparison sake, a typical triceps routine (three exercises x four sets x 10 reps) is 120 reps. After finishing of tri’s with two compound exercises—Smith machine close-grip bench presses and dips—Lewis has racked up at least four times the typical tally. And he’s done most of those reps in short order via giant sets.

As the preceding triceps barrage illustrates, Flex isn’t afraid to crank up the rep count. He’ll frequently push sets to the 20-rep mark. “The key isn’t how many reps you do, the key is how hard you’re working the muscle,” he states. “And for me it might take 10 reps before I really start to exhaust the muscle, so that first 10 [reps in a set] is a setup for the last 10 when I really push it and keep the tension on the muscle for as long as possible. A lot of people think sets of three or four reps really heavy are harder than 15–20 reps with a lighter weight. But if you do three reps, you get in and you get out. I want to keep the set going, keep the tension on the muscle. That’s the hard work that makes you grow.” Lewis uses a variety of rep schemes, so he might pyramid up to a heavy set of eight reps on one exercise, then hit 20 on every set of his next exercise.

Click NEXT PAGE to see Flex’s next 5 training tenets! >> 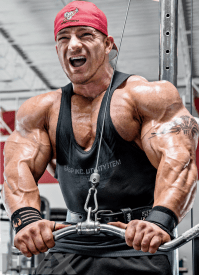 The Welsh Dragon creates new exercises, new set/rep schemes, and new methods of upping intensity. To illustrate all three of these, check out his calf training. Granted, his calves have always been bulls, so he’s gone long stretches without training them. Nevertheless, when he does work them, he stimulates growth with what he calls hybrid training.

“Hybrid training is basically a triset or giant set, but it involves exercises with weights and exercises with just body weight, and it incorporates lots of stretching and squeezing,” he explains. “It really started with just me getting sadistic, doing a lot of deep stretches for holds and really strong contractions. You can really go medieval on your calves while just using your body weight. With the weight out of the way it lets you focus on the stretches and holds for as long as you can stand the pain. I’ll go through three different rotations. I call them giant sets from hell, and if you try them you’ll see why. At the end of each rotation, I stretch for a minute and then go back to the first exercise. I go through each rotation three times.” 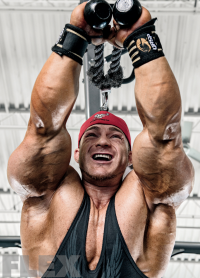 the two-time Olympia 212 Showdown champ says of training partners. “They don’t have to be top-level bodybuilders, but they have to have that drive to better themselves. Usually, the guys who aren’t top-level guys are more motivated to train harder to gain size. The crucial thing is they have to be dependable. They have to show up on time and be ready to go and want to push me as hard as they push themselves. I like someone in my face aggressively when I start fatiguing on the last couple of reps. I want them to get in my head and help me force a couple of extra reps out. So when I’m home, I always train with partners.”

The theme of most items on this list can be summed up as “maximize intensity.” A decade ago, Lewis trained under the king of high-intensity training, six-time Mr. Olympia Dorian Yates. “At the time, I don’t think I had enough years under my belt to train that style,” he says. “I do sort of dabble in HIT in the off-season now. I like to mix up my off-season training. But for me I like a little bit more volume [than HIT]. When I finish a HIT workout, I’ll feel like things went too fast and I didn’t have enough sets or reps.” Lewis does more volume than the six-time Mr. O did, but he nevertheless adopted the take-no-prisoners approach of his fellow British legend. The Welsh Dragon endeavors to bring the heat to his every working set.

“That mind-to-muscle connection is the most important thing in my training success,” Lewis states. Without it, he may have remained known mostly for his legs instead of, arguably, the most aesthetically pleasing shape in all of bodybuilding. “I’ve just recently learned how to really hit my chest so my front delts don’t take over. Arms were the first area where I really learned how to focus on them in a way I was missing before. Before, my forearms would always take over. And then I started doing certain exercises and really squeezing, and I became less concerned with the weights. And over time I taught myself to squeeze and get connected with the muscles, and the weights obviously came back up with time.” 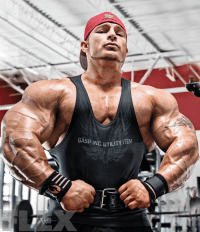 The reigning 212 champ always has a vision of how he wants to appear at his next contest. This dictates what he does in each workout. For example, he places a greater emphasis on training his spinal erectors with back extensions than most of his competitors. As a result, his Christmas tree back details are a contest-clenching strength. His next chest workout will target his upper pecs. His next lumbar workout will likely have at least one exercise that stresses his inner traps.

Lewis neglects nothing, because he knows even the smallest muscles can make the difference between first and fourth when you’re going against the best 212-or-under bodybuilders in the world. – FLEX