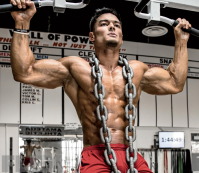 “I WOKE UP EVERY MORNING TO THE SOUND OF WEIGHTS CLANGING TOGETHER,” RECALLS Jeremy Buendia OF HIS CHILDHOOD.

The noise emanating from the basement of the Buendia residence in San Jose, CA, was Jeremy’s father, Louie, a dedicated lifter in his own right who passed the love of iron on to his son. “I watched my dad weight train ever since I could remember,” Buendia says. “He raised me to be an athlete, and he started training me at the age of 6 doing various speed drills, pushups, and other calisthenics-type exercises. My dad introduced weights to me at 10 or 11 years old, and it became a part of my everyday life.” By age 24, Buendia was the Olympia Men’s Physique Showdown winner, and with his successful title defense last September, he is the division’s first repeat champion. Here are the training strategies of the two-time Olympia Men’s Physique Showdown champ.

The advantages of having experienced guidance from the beginning fast-tracked Buendia’s success in transforming his physique. “I always did a bodybuilding-style split—that’s what I saw my dad do, so that was my initial knowledge,” he says. But as an all-league linebacker at Whitney High School, he also worked hard at improving his athleticism. “I did sports-specific training where I focused on speed and explosiveness, but that never held me back from going to the gym for a second time during the day and hitting the weights the way I liked to.” Bulging spinal disks in his neck and lower back essentially ended his gridiron pursuits, but he simply channeled his competitive energy to a new aim: bodybuilding contests. His first show was the 2010 NPC Contra Costa Championships in California, where he won the teen overall crown. It was the victory that would fuel all the others to come. “That’s when I realized this was my calling,” he says.

After a few more bodybuilding contests, he jumped to the new physique division, which perfectly matched his desire for sculpting classic aesthetics over brute-force mass. Buendia quickly built an unrelenting head of steam, earning his pro card at the 2013 NPC Junior USA Championships, then going on to win his first pro contest, the 2013 Greater Gulf States Pro, before taking second at the inaugural 2013 Olympia Men’s Physique Showdown. And the rest you know.

Buendia is quick to credit a fateful decision for the improvements that elevated him to elite status. “My approach to weight training changed significantly when I began working with Hany Rambod on my contest prep in 2014,” he says. “Hany introduced FST-7, and it has been something that I’ve grown to trust.” FST stands for “fascia stretch training,” while the “7” refers to the seven sets you do for the final exercise of a given body part. Numerous factors are also tweaked to stoke the body’s growth mechanisms. “We emphasize optimizing pumps in the gym,” Buendia explains. “The elements include tempo manipulation, rep-range manipulation, and minimizing rest in between sets.”

“My training technique is purely about honing the mind-to-muscle connection,” says Buendia. “I use a weight that is heavy—but not too heavy where I sacrifice my form. I typically train each set until failure, allowing only enough rest to recover for the next set.”

As for reps, the range per set varies between eight and 15. “My reps are very controlled,” he explains. “Both the positive and negative are of moderately slow tempo, emphasizing the stretch of each eccentric motion and squeeze of each concentric motion.” He’ll pyramid up the weight from set to set during some workouts, “especially my first few exercises when I’m getting warmed up.” Once acclimated, though, he’ll usually jump straight into two to three working sets.

“I’ve never really hit much of a plateau,” Buendia says. “I never do the same workout two days in a row. I read my body and do what feels best that day.”

*For incline dumbbell press, dumbbells are held together with palms facing each other. At the end of each superset, Buendia hits a most-muscular pose for 10 seconds, contracting his pecs as hard as possible.

†Plus 10 partials at the end of each set.

#No more than 30 seconds of rest between these supersets.

Note: Buendia will take a rest day every few weeks, as needed.