This Weider principle has both the best and worst name. It’s the best because everyone loves quality. The principle’s moniker sells it better than any advertising slogan could. But it’s the worst because “quality” could just as easily apply to any other Weider principle. The name tells you nothing about shorter rest periods between sets. Calling it the Weider reduced-rest principle would be much more appropriate, but once you get the quality seal, it’s not coming of. This month, we’ll explain the advantages and disadvantages of the Weider quality principle and show you how to best use abbreviated rests to spur muscle growth. 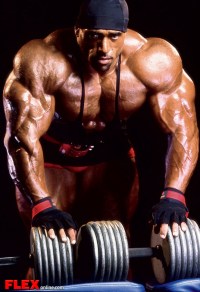 reducing your rest periods between sets to less than one minute. Around the time this advice was popularized in the ’70s, bodybuilders believed doing faster workouts was a pre-contest strategy for heightening deﬁnition and muscle shape. During the off-season, they trained heavy on compound lifts with long rest periods to build mass. Pre-contest, they did more reps, more isolation exercises, and rested less. One of the main reasons we’re revisiting the Weider principles is to examine the reasoning behind them in light of today’s science and practical knowledge. Today, most competitive bodybuilders don’t radically alter their training when on a diet. They lift weights in the most efficient muscle-building manner in the ﬁnal weeks before a show, just as they do in the off-season, to keep as much size as possible, and they use their diet and cardio to shed fat. Deﬁnition and improved muscle shape will appear when fat is ﬂayed away. Nevertheless, resting less between sets, as the quality principle prescribes, is a valuable technique whether in the off-season or pre-contest.

According to FLEX senior science editor Jim Stoppani, Ph.D.: “A recent study in trained male lifters had one group train for eight weeks using a two-minute rest period between sets. The other group started week one using a two-minute rest period but reduced rest by 15 seconds each successive week until they were down to 30 seconds of rest between sets. The group decreasing their rest time increased arm size by 21% and leg size by 28%. The group keeping their rest the same increased arm size by 14% and leg size by 19%.” In the ﬁrst group, the extra expansion occurred because exhausting a muscle with minimal rest between sets can lead to the natural production of a variety of growth factors.

Our sample hamstrings routine features minimal rest periods, ranging from 40 seconds between sets of lying leg curls to 20 seconds between sets of seated leg curls. The quads hybrid-rest routine starts with heavy sets of squats and leg presses using standard rest periods to maximize the weight lifted, then it ﬁnishes with higher-rep sets of hack squats and leg extensions with minimal rest to maximize blood volumization.

Here are the pluses of reducing rest periods between sets:

There are two potential pitfalls to reducing rest periods:

If you’re limiting yourself to 20–40 seconds between sets, you can’t guess that time frame. You’re not doing your next set only when your breathing has returned to normal and you feel recovered. You’re going well before then. So, between sets you need to monitor yourself using a clock or watch with a second hand, or use a stopwatch. When Hany Rambod trains Phil Heath, he monitors the second hand on his watch between sets of the sevens sequence (typically seven sets with 20–30 seconds rest between sets). Other times, Heath watches the clock. Be precise about your time between sets, and as soon as your rest is ﬁnished, go back to work. FLEX